Share Share on Facebook Tweet Tweet on Twitter Pin it Pin on Pinterest
There are trillions of microplastics in the ocean — they bob on the surface, float through the water column, and accumulate in clusters on the seafloor. With plastic being so ubiquitous, it’s inevitable that marine organisms, such as sharks, will ingest them. A new study in Scientific Reports investigated microplastic ingestion in four species of demersal sharks found in the North Atlantic Ocean, which were captured as bycatch by a local fishery in Penzance, U.K. A team of six researchers, from the University of Exeter and the University of Leeds, examined the stomachs and digestive tracts of 46 sharks, and found that 67% contained microplastics. A total of 379 microplastics — plastic particles or fibers smaller than 5 millimeters, or a fifth of an inch — were found in the sampled sharks. 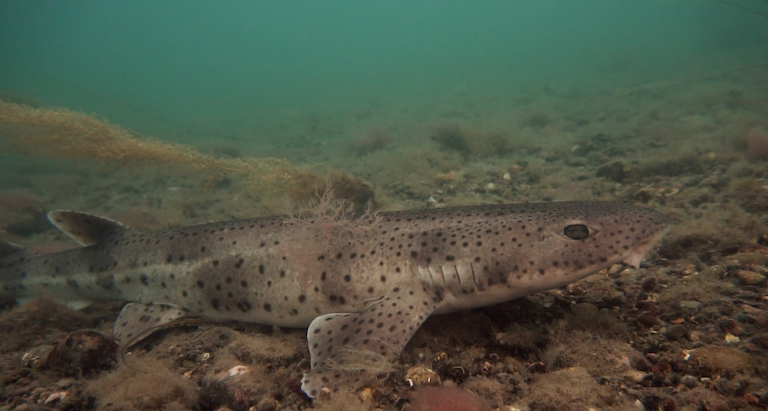 Bull huss shark. Image by Jakes Davies. Many of the plastic fibers were synthetic cellulose, the material found in polyester clothing and hygiene products such as face masks, which have become increasingly prevalent during the COVID-19 pandemic. “I think there is definitely some cause for concern,” Kristian Parton, lead author of the study and researcher at the University of Exeter’s Centre for Ecology and Conservation, told Mongabay in an email. “Although many of the particles ingested by these sharks will be excreted eventually, they potentially remain inside the body long enough for inorganic pollutants and chemicals (attached to the particles), to enter into the bodies of these sharks.” Parton said he found it surprising that sharks living off the coast of Penzance in Cornwall, on the southwestern tip of Britain, would contain so many plastic particles. 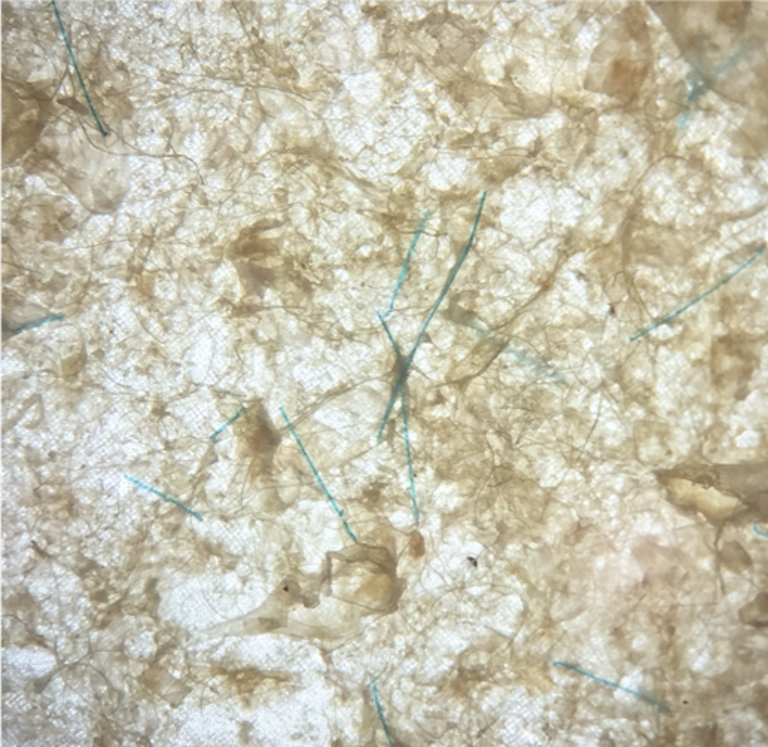 Polyproylene fibers found in one of the sampled sharks. Image by Kristian Parton. “I actually didn’t expect to find as many as we did in these sharks,” he said. “The waters around Cornwall are thought to be some of the most beautiful in the U.K., and so I didn’t think there would be much pollution.” Parton’s co-author, Tamara Galloway, holds a similar view. “We were not expecting to find microfibers from textiles in so many of our native shark species,” Galloway, a marine biologist and professor of ecotoxicology at the University of Exeter, said in a statement. “Our study highlights how important it is to think before we throw things away.” Demersal sharks can be found at depths of 5 to 900 meters (16 to 3,000 feet), although they tend to live and feed in the demersal zone of the ocean, which is near the seafloor. The four species of demersal sharks used in this study included the small-spotted catshark (Scyliorhinus canicula), starry smooth-hound (Mustelus asterias), spiny dogfish (Squalus acanthias) and bull huss (Scyliorhinus stellaris).

Spiny dogfish. Image by NOAA / Wikimedia Commons. “There appear to be two routes for these particles to end up in the sharks,” Parton said. “The first through their food source [such as] crustaceans. Their prey may already contain these fibres, and consequently it’s passed to the shark through bioaccumulation up the food chain. The second pathway is direct ingestion from the sediment. As these sharks feed, they’ll often suck up sediment into their mouths, some of this is expelled straight away, although some is swallowed, therefore fibres and particles that may have sunk down into the seabed may be directly ingested from the surrounding sediment as these sharks feed.” Some sharks only contained a few plastic particles, but others contained dozens. The larger the shark, the more plastic was in it, the findings suggested. The highest number of microplastics was found in an individual bull huss, which had 154 polypropylene fibers inside its stomach and intestines. “It’s perhaps likely this individual shark had swallowed a larger piece of fishing rope/netting and this has broken down during digestive processes within the shark, and also broken down into smaller pieces during our analysis,” Parton said. 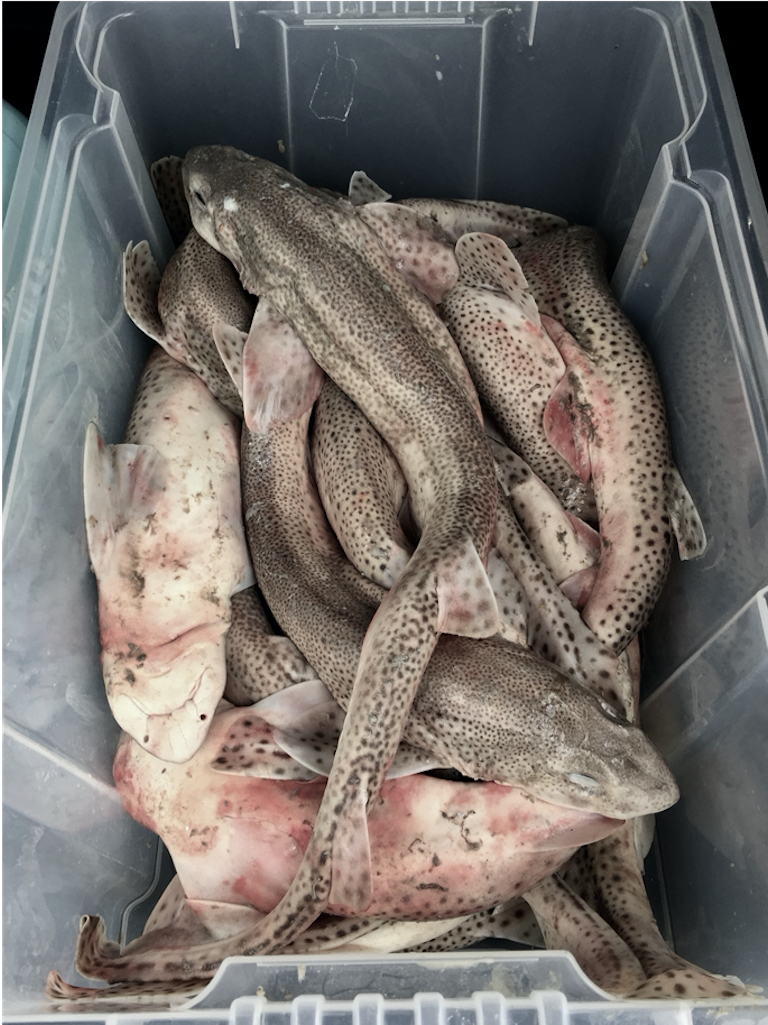 Lesser-spotted dogfish caught as bycatch. Image by Kristian Parton. While this study only examined the stomach and digestive tracts of demersal sharks, Parton says it’s possible that plastic would be present in other parts of the sharks’ bodies, such as the liver and muscle tissue. However, more research would be needed to prove this. At the moment, there is also limited understanding of how microplastic ingestion would impact a shark’s health, although microplastics are known to negatively influence feeding behavior, development, reproduction and life span of zooplankton and crustaceans. “If we can show that these fibres contain inorganic pollutants attached to them, then that could have real consequences for these shark species at a cellular level, impacting various internal body systems,” Parton said. 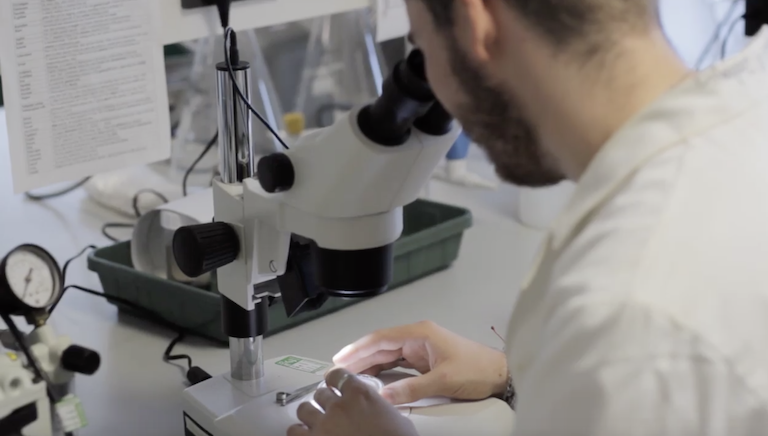 Parton in the lab. Image by Kristian Parton . This new study demonstrates how pervasive and destructive plastic pollution can be in the marine environment, according to Will McCallum, head of oceans for Greenpeace U.K. “Our addiction to plastics combined with the lack of mechanisms to protect our oceans is suffocating marine life,” McCallum said in a statement. “Sharks sit on top of the marine food web and play a vital role in ocean ecosystems. Yet, they are completely exposed to pollutants and other human impactful activities. We need to stop producing so much plastic and create a network of ocean sanctuaries to give wildlife space to recover. The ocean is not our dump, marine life deserves better than plastic.”
Share Share on Facebook Tweet Tweet on Twitter Pin it Pin on Pinterest

The Best Canvas Prints: 10 Styles for Any Home

The Best Canvas Prints: 10 Styles for Any Home Canvas prints can transform a space and create an entirely new look o...
Read More

I was very young the first time I noticed these colossal modern structures atop a green hillside. They rotated gracef...
Read More

Banff National Park is Canada's oldest and best-known national park, established in 1885. Situated in Alberta's Rocky...
Read More
Product has been added to your wishlist.
You can view your wishlist by creating or login account.
Please create account through ##customer_email## email
Login Register
×
Welcome Newcomer