Here's how to use scale and proportion to add drama and enhance three dimensional space in your photos.

Scale is an important element of composition that increases the sense of three dimensional space in a photo, drawing or painting. By including a sense of scale and proportion in your photographs you may be better able to tell the story you want to tell.

How To Use Scale In Photography

I found these three likely lads near the beginning of an overnight hike I undertook on the outskirts of Ilulissat in Western Greenland.

Most of the walk skirts around the edges of the wonderful Ilulissat Icefjord. I only saw a handful of people during the entire adventure and this encounter was a great opportunity to utilize scale to illustrate the massive landscape I was exploring.

While the icebergs in this photo are relatively modest in size, when compared to many others in the Ilulissat Icefjord, adding the human element does provide an indication as to their size relative to the Inuit locals in the foreground.

Use Viewpoint To Reveal More Of The Story

Viewpoint refers to the position from which a photo is made. Achieving the best possible viewpoint can dramatically influence the mood that's expressed.

For example photographing from an elevated viewpoint can create a strong sense of distance and space.

The photo of the three Inuit guys by the shores of the Ilulissat Icefjord is a good example of how a high vantage point can be important in landscape photography.

If I’d made the photo from down at their level they would have blocked quite a bit of the background.

What I needed was to show them in relation to their surroundings and the best way to achieve that was by finding a way to visually separate them from the icebergs in the background.

By photographing from a higher vantage point I was able to photograph over the top of the three men and ensure important elements in the background were not obscured.

Needless to say that, by photographing from such an elevated viewpoint, the men are further diminished in size in relation to the icebergs. 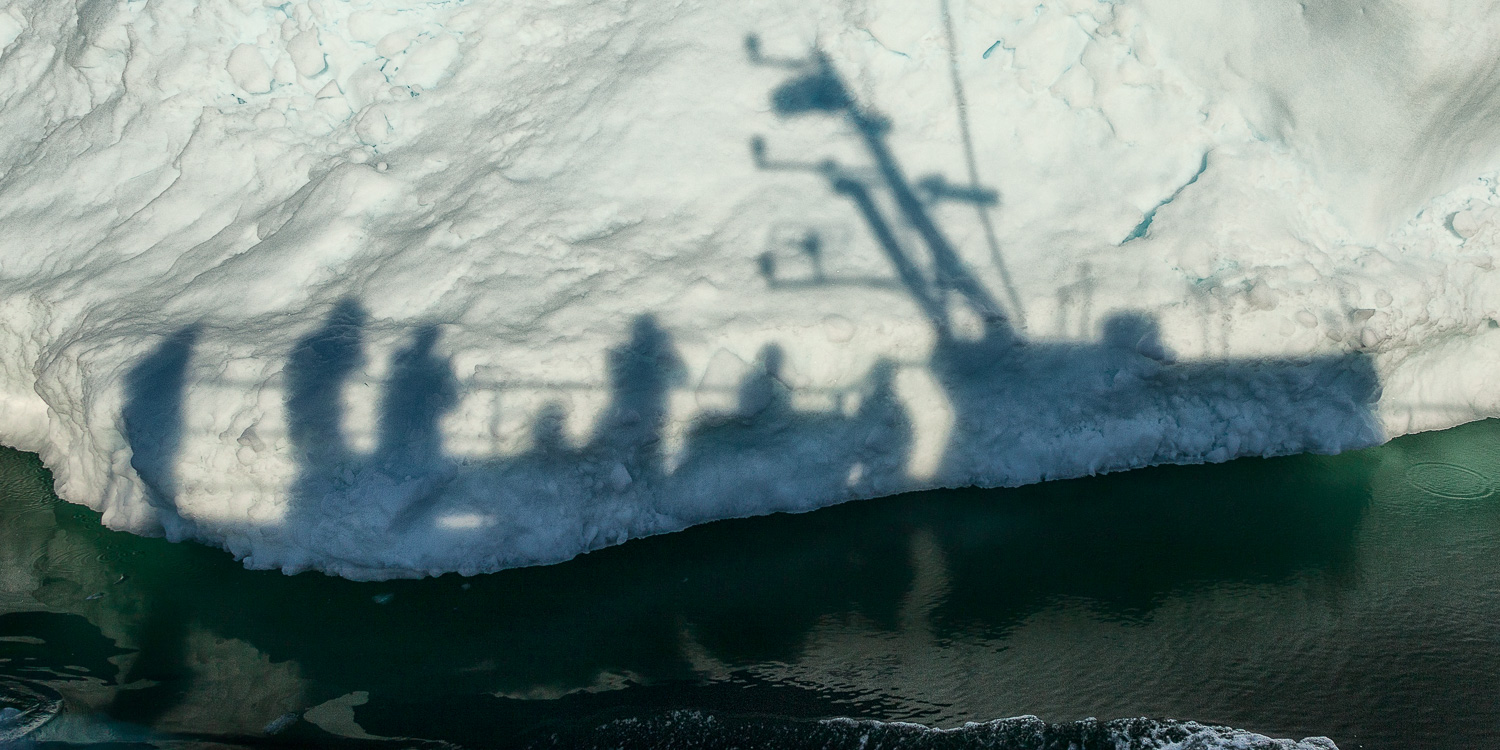 Fortunately there were three lads, and it’s often easier to build a good composition around odd numbered groups.

I made a few photos of this scene, all the while waiting for the guys to separate enough from each other to suggest a triangular shape.

Circles placed into triangular shapes are a great way to organize a group of people into a cohesive and harmonious composition.

The good news is that you don’t necessarily need an equilateral triangle. As long as the group in question is placed into a roughly triangular shape a better composition will be achieved.

Needless to say that, being guys, I figured at least one of them would throw a stone into the water.

It’s a small thing, but probably just enough to add a sense of action and narrative into an otherwise static image.

While a spectacular location, the bergs in the photo at the top of this post are not your classically shaped icebergs.

Likewise the contemporary clothing worn by the guys, and the fact that their backs are to the camera, make it hard to interact with them in a meaningful way.

While the location is exotic, for someone from my neck of the woods, I still had to rely on composition to produce an interesting image. 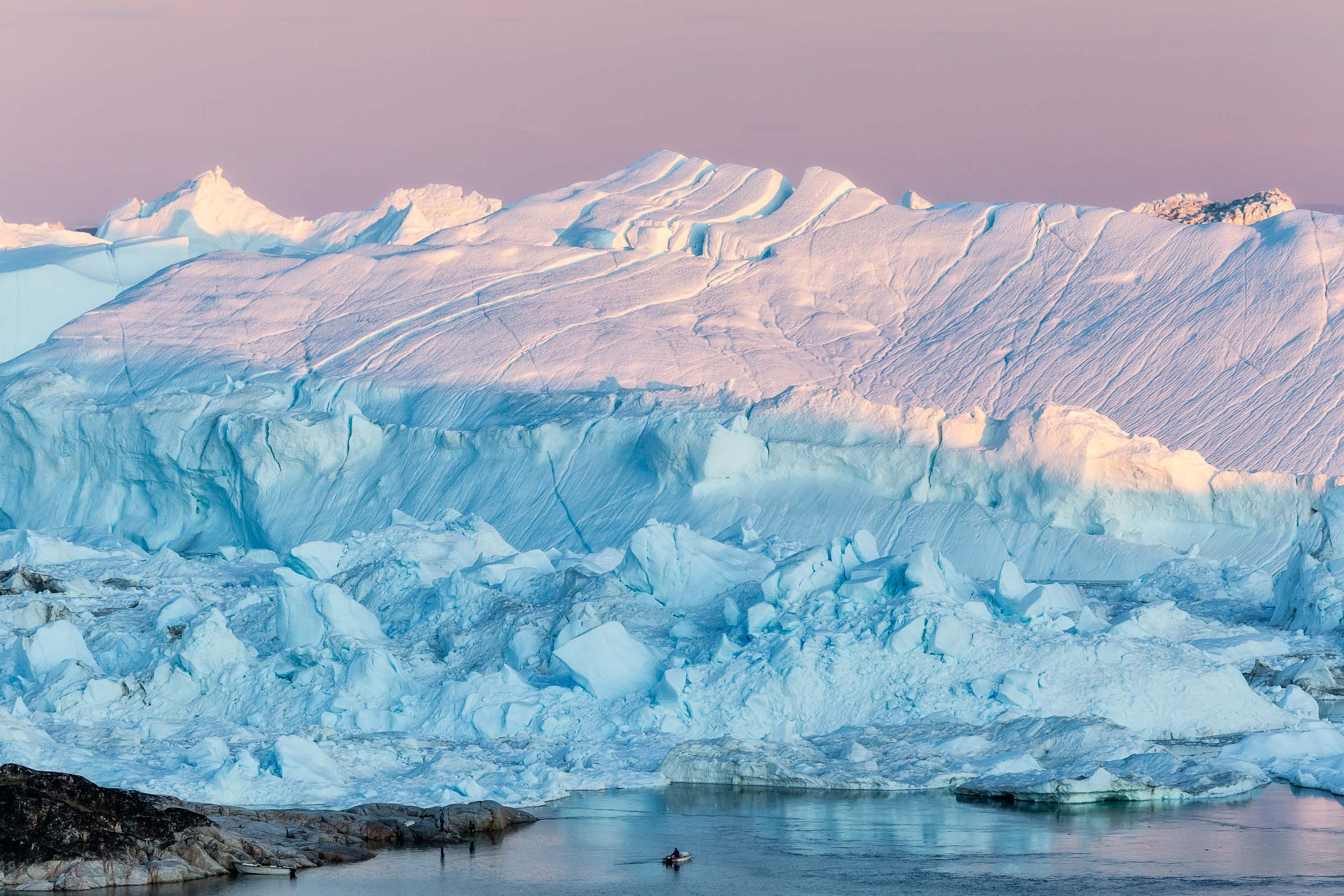 Proportion in photography showcased by a fishing boat dwarfed by icebergs, Ilulissat.

An interesting way to enhance the sense of scale in your photos is through proportion.

The concept of proportion in photography allows you to compare the size of objects, relative to each other. In doing so you can add more or less importance to them.

Take a look at the fishing boat at the very bottom of this image. Photographed under the midnight sun the fisherman and his boat give a great indication of the truly immense scale of this environment.

The iceberg is massive, but it’s the contrast in size between iceberg and fisherman that makes this such a compelling image.

I think the metaphor is clear.

Despite the technological sophistication of the age in which we live, each of us remains insignificant compared to the awesome power of nature.

Proportion Of Color In A Photo

Images that are based, predominantly, around color can be really interesting.

When dealing with more than one color the proportion of each color, relative to each other, can affect the way we respond to the image.

For example, an equal distribution of color can imbue the image with a sense of balance and harmony.

Think about the national flags of the following countries:

All three flags express notions of order, balance and cohesion which is achieved through highly structured, symmetrical composition.

Conversely an image composed, primarily, around color can be more dynamic when there’s a difference in the relative proportions of each of the colors within the image.

Let’s take another look at my photo of the tiny fishing boat beneath the massive iceberg.

Did you notice how the bottom half of the image is illuminated by cool, bluish light reflected from the sky above?

Contrast that with the top half of the image which is lit by the warm light of the midnight sun.

That split between warm and cool colors adds to the three dimensionality and inherent drama within the scene.

While the warm light at the top of the image is glorious and uplifting, the cold colored light at the bottom of the photo is ominous and somewhat foreboding. 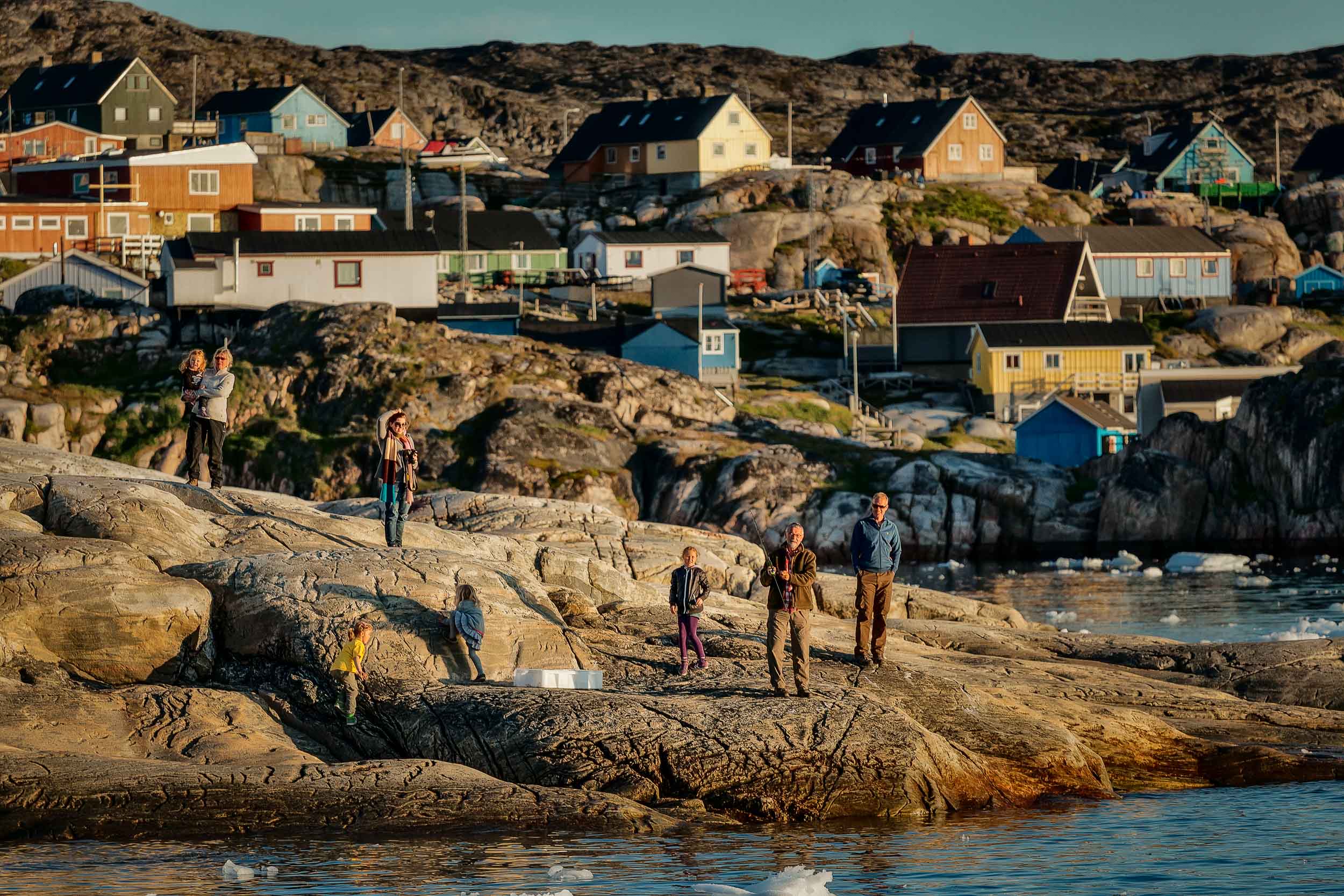 Attention to proportion produces a cohesive image of a family in Ilulissat.

How To Use Proportion In Your Photos

Proportion refers to how well objects fit together, in relation to each other and the environment in which they're depicted.

Can you see the way circles and triangles have been used in this image of a family fishing by the shores of the Ilulissat Icefjord?

All I had to do was wait and watch, through my camera’s viewfinder, until the kids moved into positions that produced a cohesive and harmonious result.

The fact that the family group is lit by lovely, warm light is important. I wouldn’t have made the image if they weren’t well lit.

What’s more the mood that’s displayed is joyous, which many people will enjoy.

It’s a positive story and I’m doing my best to share as many such stories as I can to help you navigate your way through life.

But it’s the composition, as much as the story being told and the life affirming lighting that elevates this photo above that of a mere snapshot.

Here's some ways how you can change the relative proportion and scale of important visual elements within your own photos.

In the world of photography, knowledge could be taken to mean technical prowess with camera and software.

In the case of wildlife photography you’d need to combine solid technique with patience, enthusiasm and an understanding of animal behavior to be able to produce great photos on a consistent basis.

It’s that broader level of understanding that will often get you to the right location, in the right season and at the right time of day to make the most compelling image at the best moment.

I think it’s a similar scenario with street photography.

Being able to anticipate the Decisive Moment is based, largely upon experience after watching and photographing people over a considerable period of time.

Needless to say experience comes over time and, in the case of landscape photography, is acquired by being out in the world making photos under a range of lighting and weather conditions.

And, of course, experience is gained through making mistakes, learning from those mistakes and taking action to avoid them in the future.

It’s great how, by adding the human element into an image, subject matter within a simple landscape study can be better understood. I hope that’s been achieved through the photos in this post.

In fact such an addition could very much effect the story or message (e.g., man’s interaction with the environment) contained within the picture.

I was very young the first time I noticed these colossal modern structures atop a green hillside. They rotated gracef...
Read More

How to stay creative in self isolation. With all of us spending more time indoors due to the coronavirus outbreak, w...
Read More
Product has been added to your wishlist.
You can view your wishlist by creating or login account.
Please create account through ##customer_email## email
Login Register
×
Welcome Newcomer