This article contains four versions of the same image, made during my visit last year to Germany. I made the original photo at the wonderful Bode Museum in Berlin.

Photographers Are Creative People Who Create Their Own Truth

I'd argue that, except where images are made for the purpose of documentation (e.g., insurance), the accuracy of the color of the statue or background is not of critical importance.

A photograph is, after all, a likeness of the object or scene depicted. It has a life unto itself, but it is, nonetheless, a two dimensional representation of a three dimensional reality.

Where things get interesting, from an artist's point of view, is where that camera-made image becomes a point of departure from which the photographer, as artist, can explore all manner of suggestions, possibilities and alternate realities.

I’m not talking about turning the busts from golden to pink, I’m referring to subtle changes in the hue (i.e., color), saturation (i.e., purity) and luminance (i.e., brightness) of the colors in the statue and/or the background.

The relationship between the color of the object and that of the background can be crucial in an image where color is such an important element in the overall emotional impact of that image.

Adjustments to White Balance, either in camera or on the desktop, will change the reproduction of the entire image.

However, changes to the hue, saturation and/or luminance of one or more specific colors within the image allow the photographer to isolate and enhance one or more parts of the image.

By altering white balance and the relationship between individual colors it’s possible to direct the viewer’s attention and effect mood. 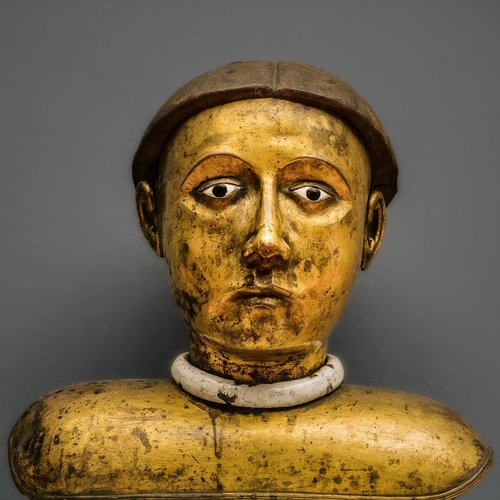 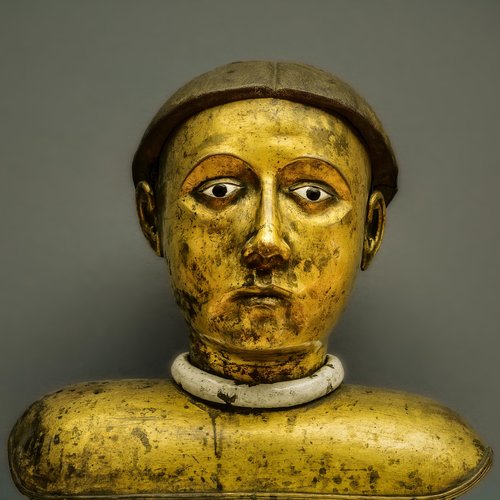 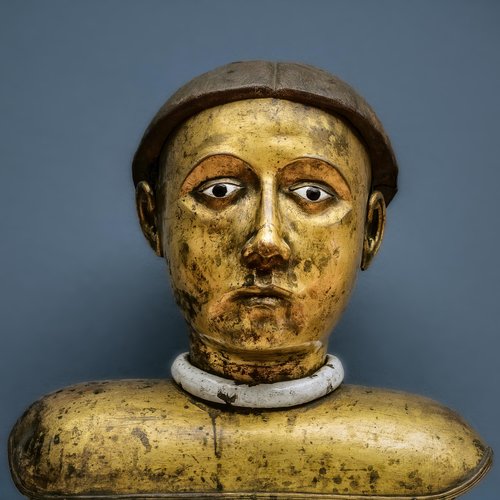 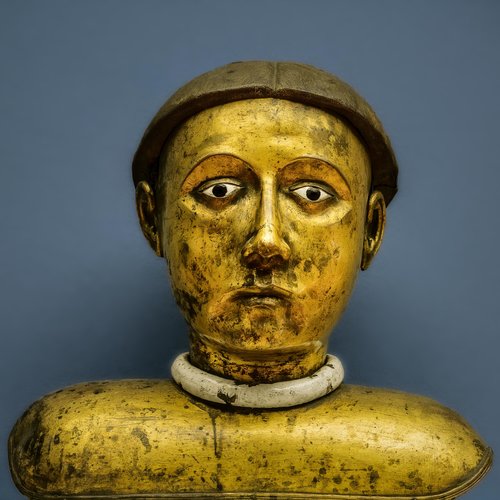 We Speak To The World Through The Photos We Make

A photographer employed by the Bode Museum to document parts of the museum’s collection would be working under controlled light, almost certainly with the aid of a tripod and in a far more methodical manner than was possible for me where, as a tourist, the process of photographing this beautiful object was completed within seconds.

“While accurate color reproduction and maximum detail are essential for the purposes of strictly adhered to photo documentation, I’m much more interested in experience.”

As a case in point take a look at these four slightly different versions of the same original exposure. You may prefer one or the other, but I’m sure you can see how the impact of the images varies from the more subtle grey and green backgrounds to the two images with the blue backgrounds.

However, the extra color contrast within that image does produce a more striking result. 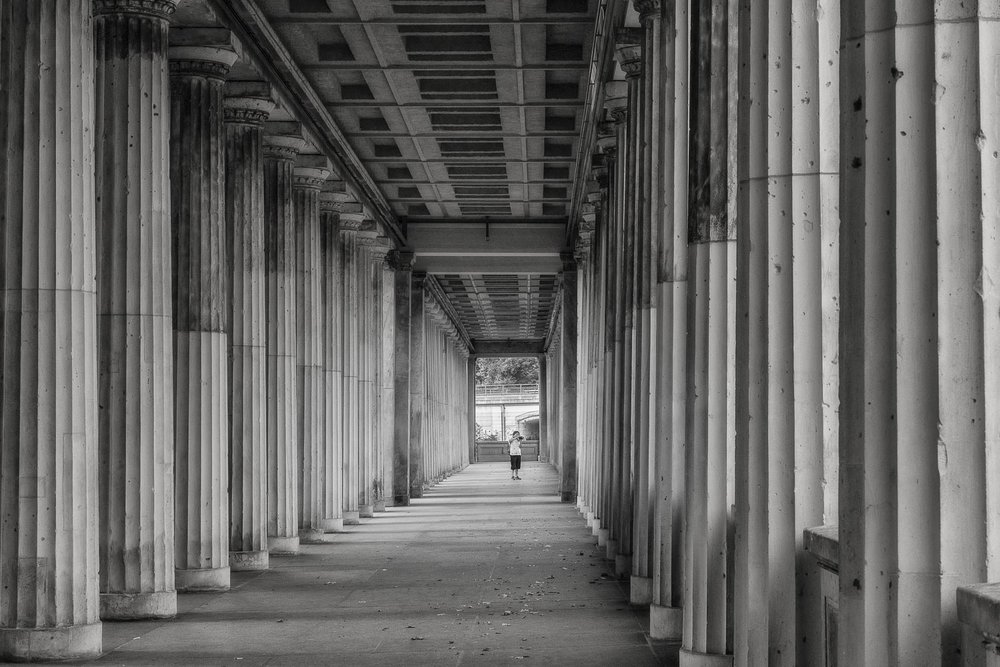 What’s right or correct is, therefore, really only relevant from a strictly documentary point of view. For example, you’ve hired a professional photographer to photograph you’re wedding.

Do you want to be recorded the way you actually look, or the way you’d like to look?

Do you want photos that accurately convey your height, weight and complexion or do you want images that explore the emotions of the day and, in at least a few photos, suggest the happiness, bliss and perfect harmony you’d want that day to represent over years to come.

From an artistic point of view what’s right or correct is often not a major concern. What’s most appropriate is what matters most. And I believe that's the case whether you're seeking to satisfy your own vision or that of your customers.

“Great photography is more concerned with inherent truth than it is with actual reality.”

I feel it's important to remember that a photograph is a record of reality, as we perceive it, and we all have the ability to create and shape a new version of that reality by the way we make the photograph, in camera, and then process it on the desktop.

Actually this concept is no different to the film/darkroom days when the choice of film, and the way the film and print were developed, provided the photographer with significant room for interpretation.

After all, what has black and white photography got to do with reality?

And it’s our own, individual approach to the events unfolding around us, and the way we perceive and interpret those events, that makes photography such as a wonderfully creative process. 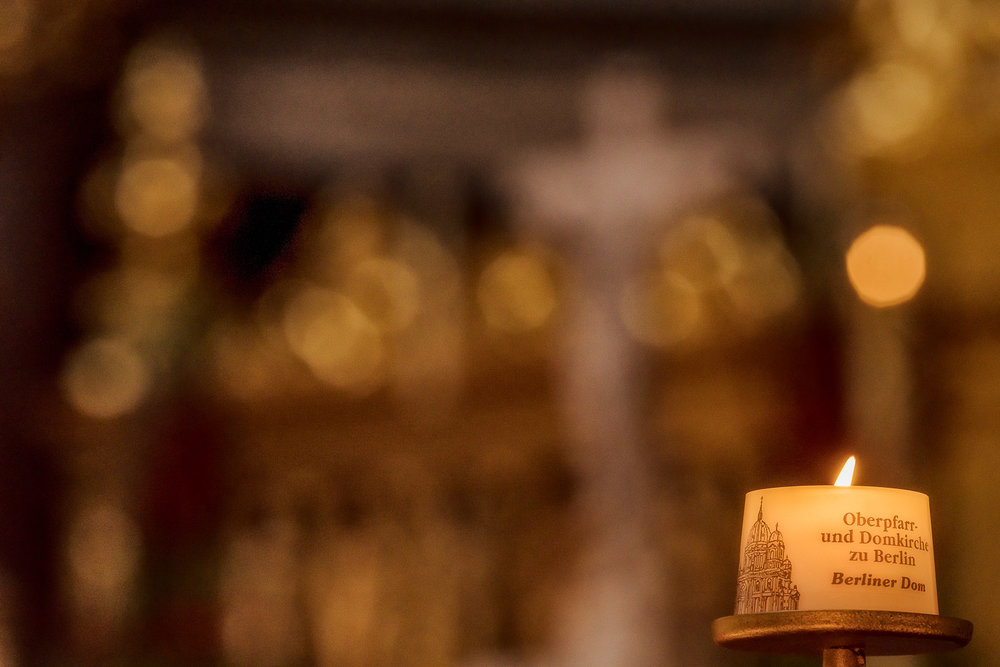 Photographers Make Their Own Reality

The word reality is largely irrelevant to creative photographers. What's important is truth. And truth and fact are not, necessarily, the same thing. Please think on that statement for a moment.

(Serious philosophers please forgive the very narrow frame into which I’m attempting to position that point of view).

Fact is arrived at through scientific means of observation and measurement.

Truth is beyond science and is associated with belief systems and ways by which we understand the world around us, and our place within it, based upon our own, individual interpretations of what we perceive.

I prefer the notion that truth is subjective and not overly concerned with notions of empirically based knowledge.

As we know facts can change over time. Much of what was once considered irrefutable has been re-written, re-framed and, in some cases (e.g., the earth being flat), debunked as nonsense over the years.

Facts are hard to directly argue against until, I suspect, old facts are replaced with newer, more accurate ones which are then considered final until more precise measurements, methodologies and analysis emerge.

“Rather than being carved into stone, sometimes facts are better written in pencil.” 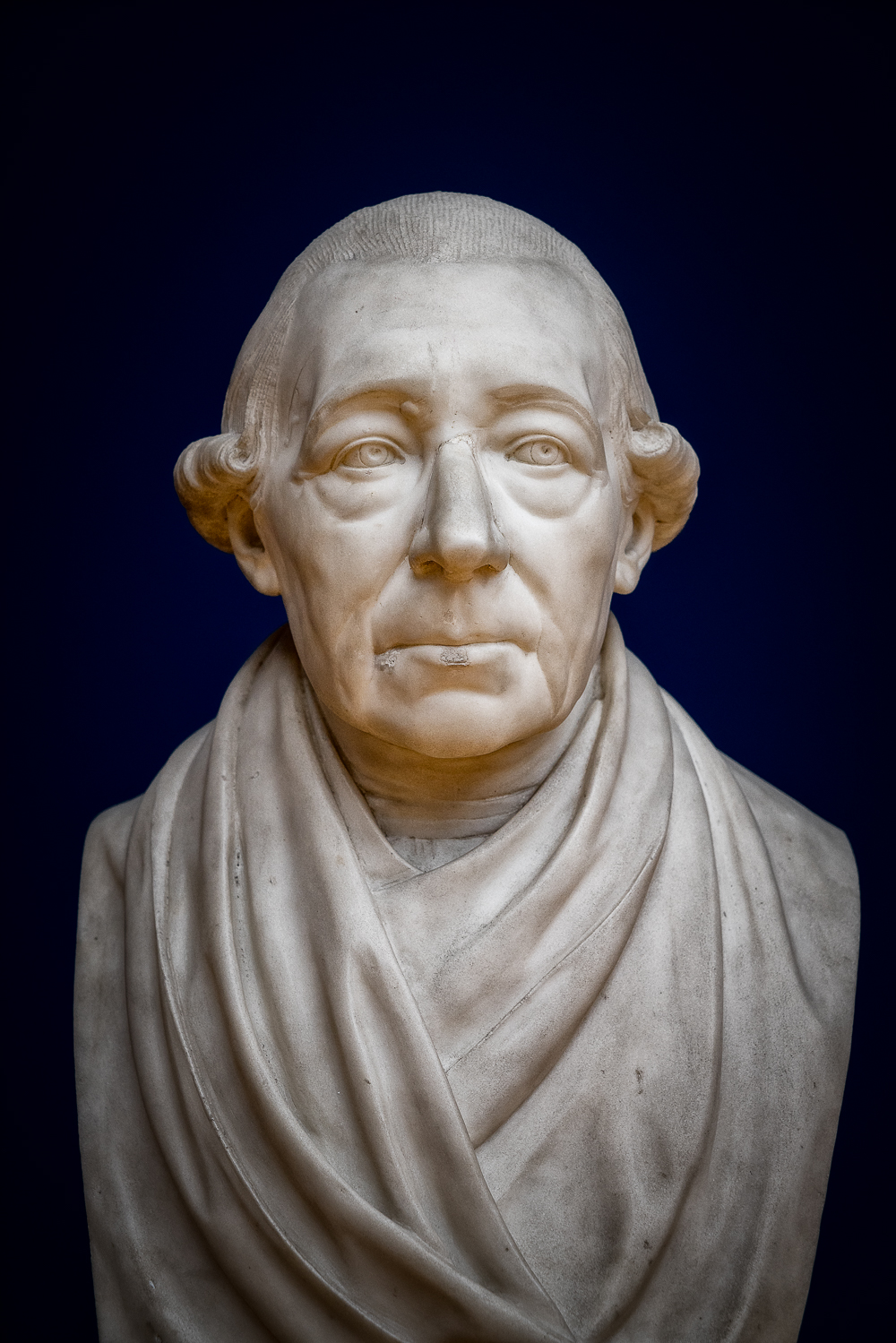 A stunningly beautiful and like-life bust at the Bode Museum in Berlin, Germany.

I Believe In The Concept Of Personal Truth

While I believe there are certain universal truths the notion of personal truth is something which depends on an individual's perspective and experience. And reality is as much about how we perceive that which we observe as it is about the actual empirical evidence associated with what we see.

For example, pick any of the four individual interpretations of the object depicted at the top of this post. If that version of the object was shown to you, in isolation and at some time after you first saw the object in the Bode Museum, how accurate a representation of the actual object would you consider it to be? 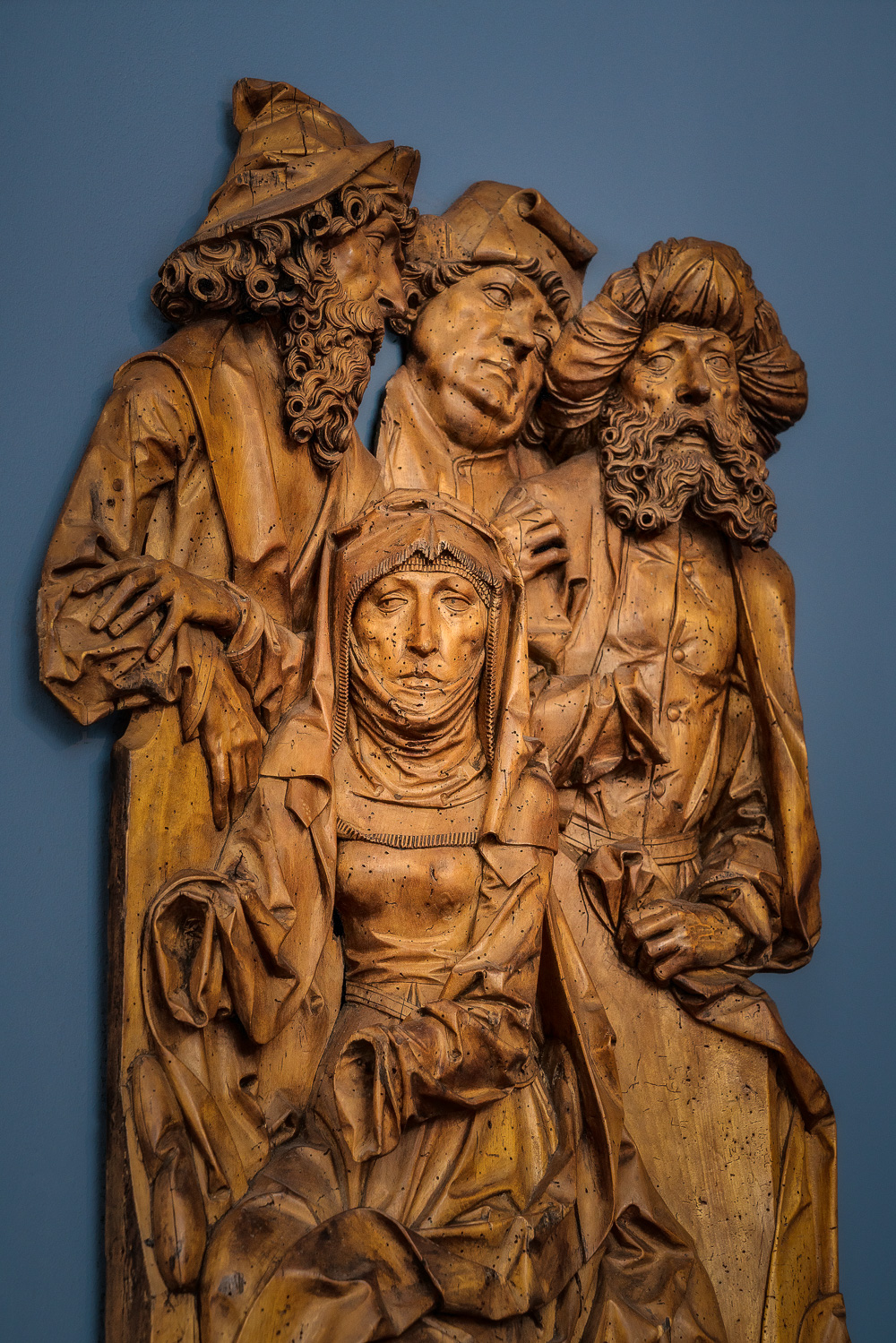 A sculpture of a group of figures at the Bode Museum in Berlin, Germany suggests, to me, intrigue and politics.

I suspect how you felt about this particular artwork, when you first viewed it, would have been based upon pre-conceived expectations (e.g., the Mona Lisa); the environment in which it’s housed and the actual viewing experience; and your level of comfort at the time.

It would be interesting to compare your responses based upon your experience of viewing the initial artwork in the gallery compared to how the photographic reproduction of the artwork is presented here on this blog.

So, in answer to the question "Is that what it really looked like", perhaps the best answer is "kinda".

The Relationship Between Artist And Audience

When it comes to the various versions of the image near the top of this post what matters most is which image works best.

Sometimes that means which image best represents the original artwork. Other times it’s about which version meets the vision and interpretation of the photographer.

More often than not it's which version of the image best connects, on an emotional level, with the audience in question.

From the artist's point of view we have first to please ourselves, but few artists exist in total isolation.

For many of us a larger audience is central to what we do, particularly when our photography is purpose driven and motivated by notions associated with the production of life-affirming images.

I’m always interested in knowing which images move members of my audience, and why.

How To Use Text With Your Photos

The addition of text next to or below a photograph is usually included as a way of describing the scene or subject de...
Read More
Product has been added to your wishlist.
You can view your wishlist by creating or login account.
Please create account through ##customer_email## email
Login Register
×
Welcome Newcomer