One of my favorite photography adventures is to work under low light at the edges of the day. It’s interesting that, during the dawn and pre-glow and around dusk and twilight, time seems to move at a very different pace.

At such times the practice of photography can become a very meditative and transcendental experience, which is one of the reasons I love it so much.

The soft, ethereal quality of light at these times of day is key and an abundance of opportunities await the photographer tuned into the light and the environment in which they find themselves.

It's no co-incidence that many of the great photographs exploring The Human Condition or the beauty of our natural world are made under such conditions.

The above image was made while on a self-motivated photo walk around the back streets of a famous and popular Hindu temple in Kolkata, India.

The light was low and it was a challenge to produce a sharp image given that I was working, hand-held, at 1/13 second.

As I feel the addition of flash to be inappropriate when producing this kind of intimate image, it was important to be able to hold the camera still while working at such a slow shutter speed. 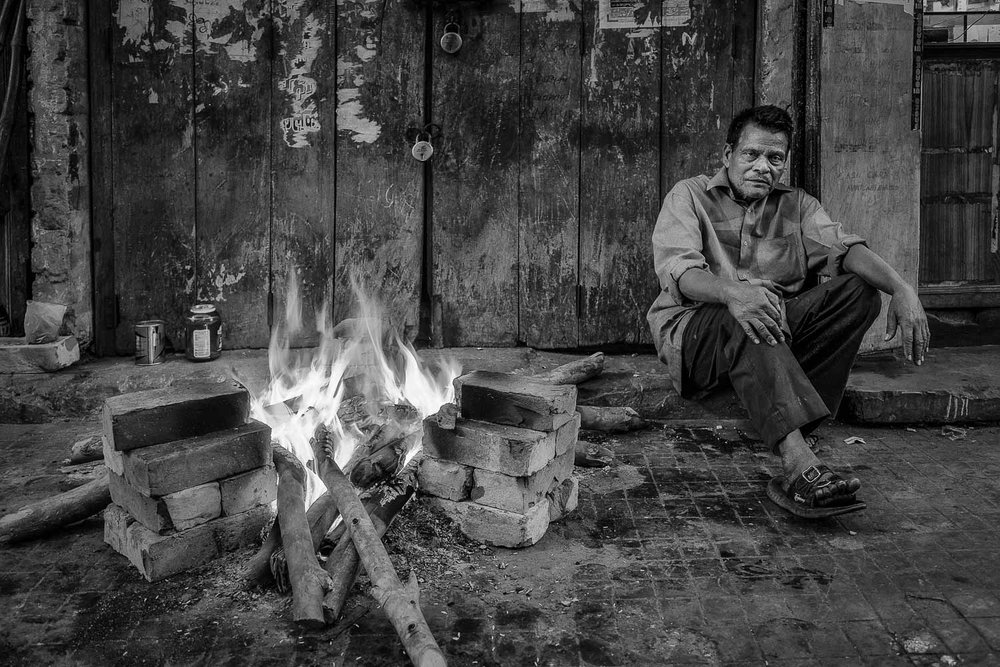 There's no doubt today’s advanced DSLR and Mirrorless cameras make it easier to make great low light images than it was in days gone by.

The most important technological advancements I’m referring to including the following:

But good technique remains important when undertaking this kind of photography and, just like in the old days, confidence comes with practice.

As well as gathering light, the relatively wide f/4 aperture I employed helped to de-emphasize the background through a shallow depth of field.

Working up close further reduces depth of field and allows for more intimate interaction with the subject.

The whole process: gaining permission for the photographic event; directing the subject; and making the image was completed within about two minutes.

I then thanked the gentleman and continued on my exploration spurred on by a feeling of elated calm. 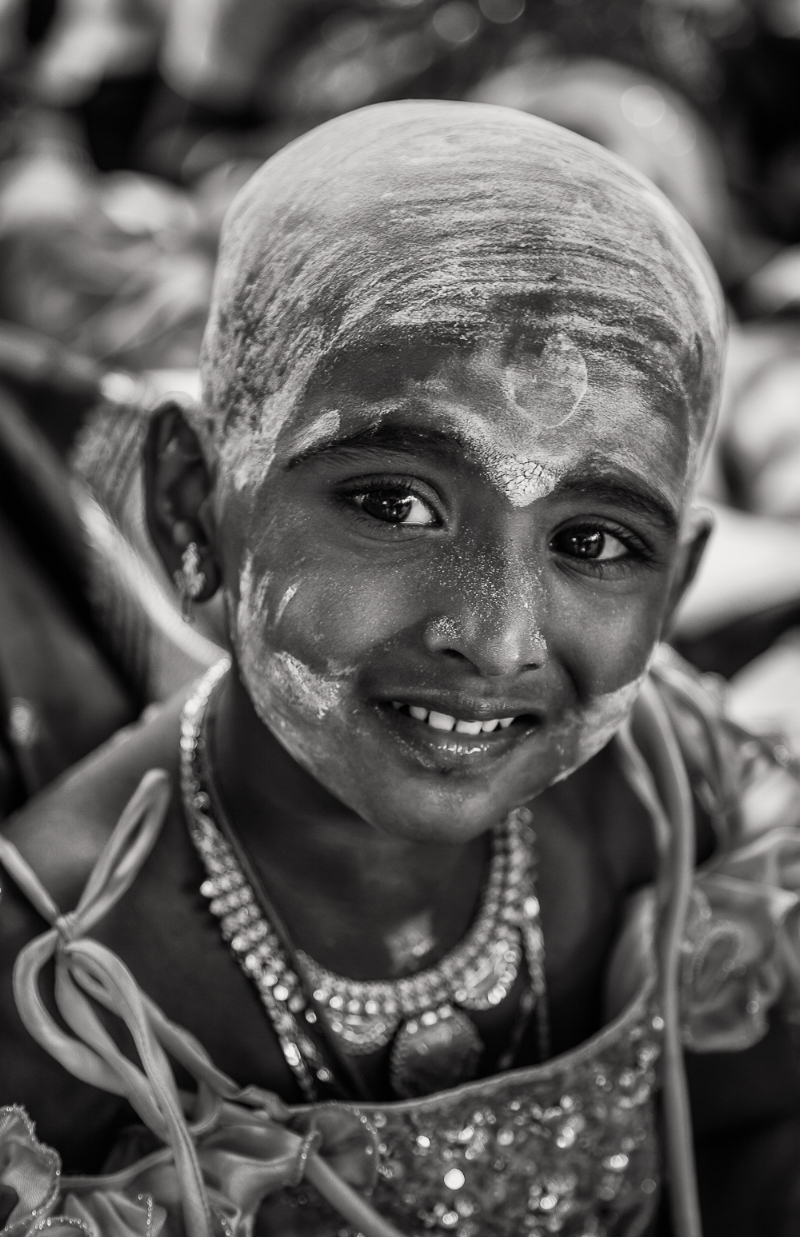 A striking portrait of a beautiful young girl in the grounds of a Hindu temple in Kolkata, India.

The Relationship Between Photographer And Subject

Some photographers talk about the need to establish a dialogue or form a relationship with the subject they’re photographing.

I use those same words, but attach a very different meaning to them.

You don’t need to know someone’s life’s story to be able to make a great photograph of them.

Likewise, you don’t need to take up a lot of their time as a way of gaining their confidence prior to asking permission to make their photo.

If your intentions are pure and you’re drawn to photograph someone then you need to approach them openly, introduce yourself and ask for permission to make their photograph.

We’re talking seconds here, which is neither a major commitment for you or the person you’d like to photograph.

It helps to explain why you want to make the photo.

And the reason might be as simple as I love your hat or I noticed how colorful your scarf is and how beautiful it looks against the background.

Those kind of statements are clearly complimentary, yet are unlikely to be considered sleazy. 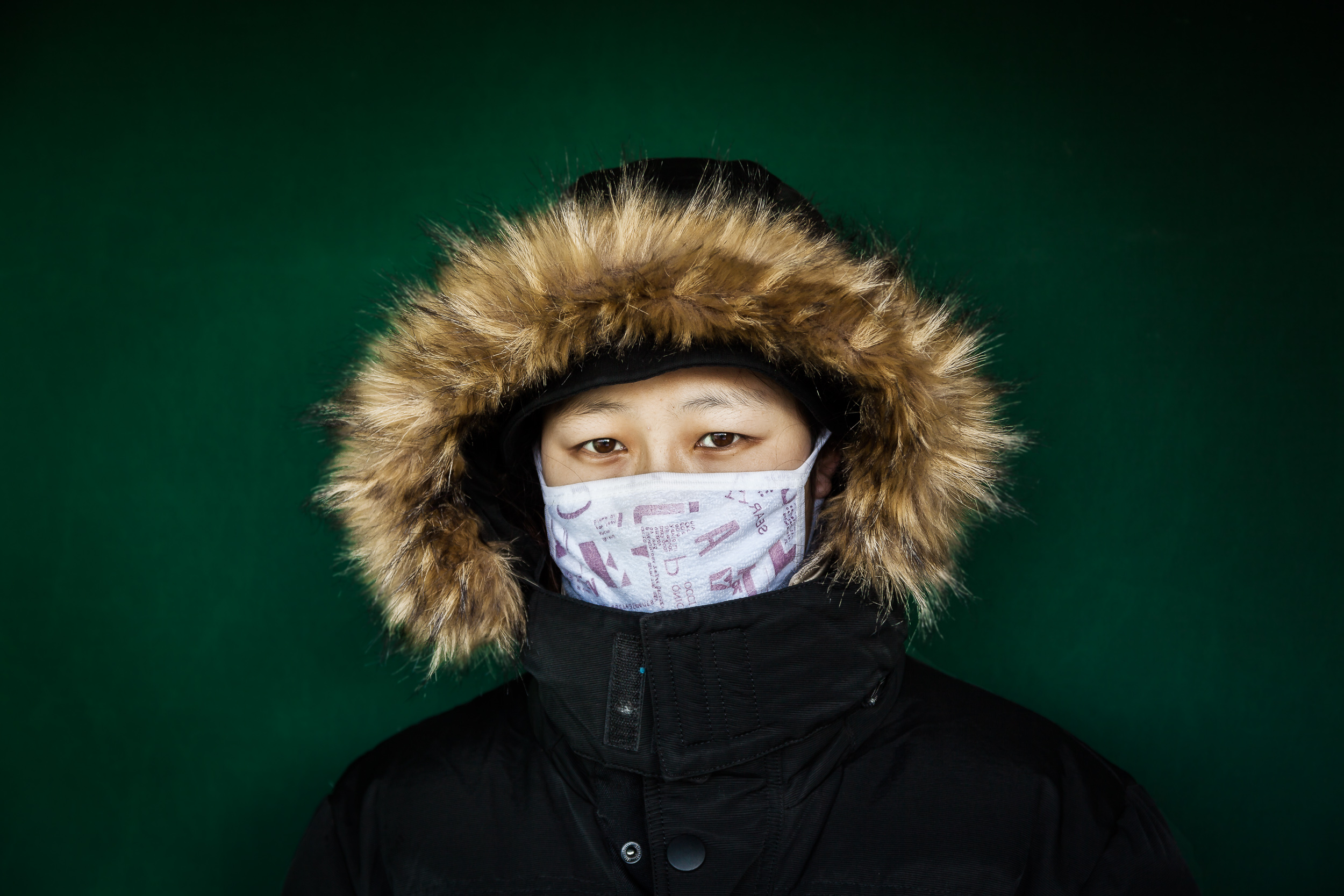 A young woman, wrapped in a hooded jacket, makes for a colorful composition placed against a deep green colored wall in Beijing, China

It’s then simply a matter of ensuring your subject is placed in good light, which is one of the reasons you may have noticed them in the first place, setting your camera and lens appropriately and making a few images.

Half a dozen frames, perhaps with a few variations in composition, is usually enough for me.

If you need to make more photos fine, just get on with it. The longer the process takes, the more uncomfortable your subject will become and the harder it will be for you to make a compelling image.

Many, so-called, candid images are either directed by the photographer or made with the subjects knowledge.

They look candid because the subject has not become overly self conscious by being made to "hold it" for lengthy periods of time.

Relationships Between Photographer, Subject And Viewer

I believe that the dialogue, interaction or connection folks talk about in a photograph is not based upon an actual discussion between photographer and subject.

Rather it’s a visual connection that occurs at three distinct levels, which I’II describe as follows: 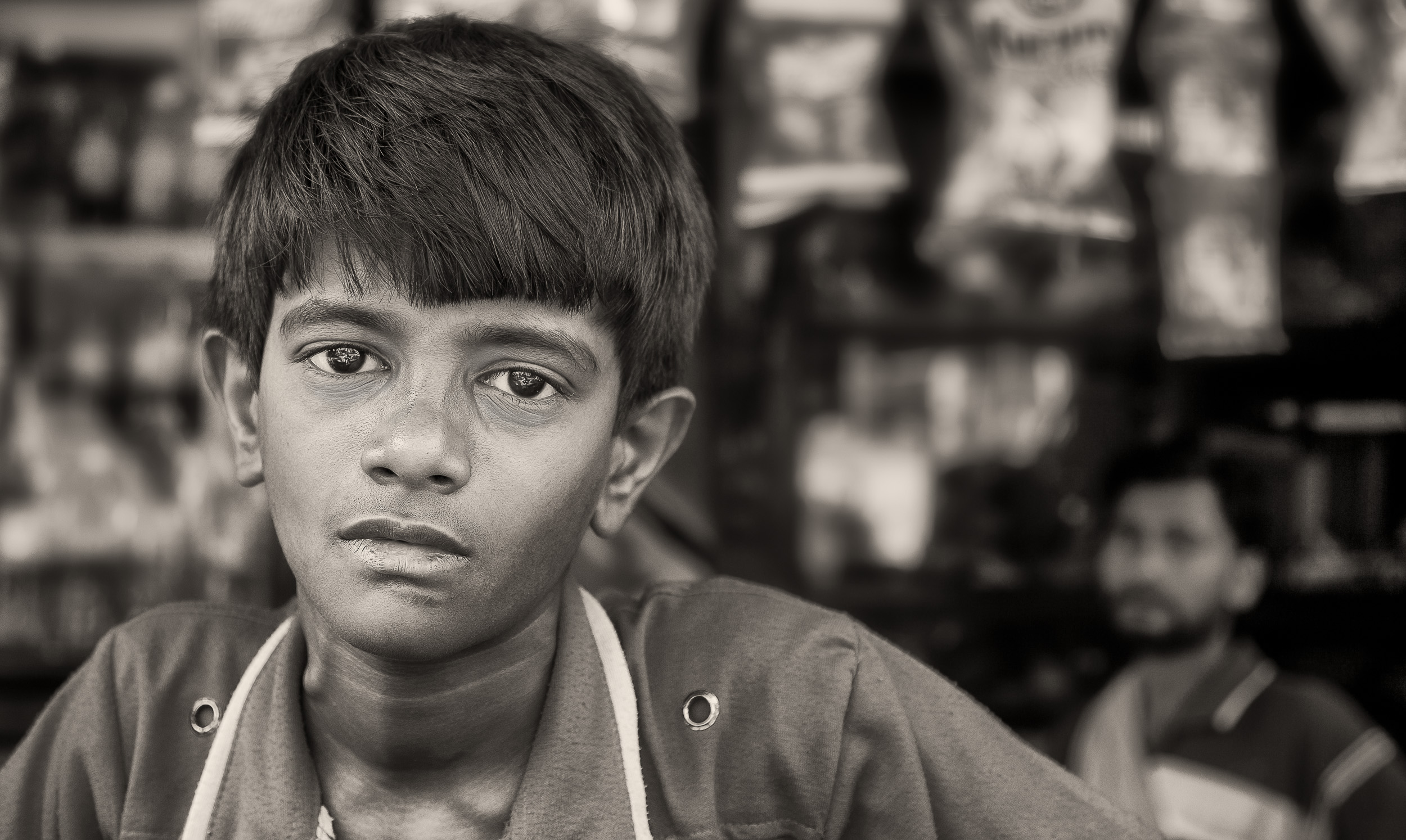 A portrait of a young boy with his father watching on in front of their store in Kolkata, India.

The Connection Between Photographer And Subject

When a photographer directs their subject to look directly into the camera’s lens an interaction is being established, not unlike the one where each person looks directly into each others eyes.

“It’s our own life’s experiences and connection to the shared Human Condition that, ultimately, binds us together. The photograph is simply a powerful conduit that allows for this connection to take place.”

The Connection Between Subject And Viewer

Viewing a photograph at a close distance can provide a very intimate, personal experience where the viewer engages, on a one-to-one basis, with the subject depicted.

This level of connection can encourage the viewer to believe that they understand the situation or personal plight of the subject depicted. 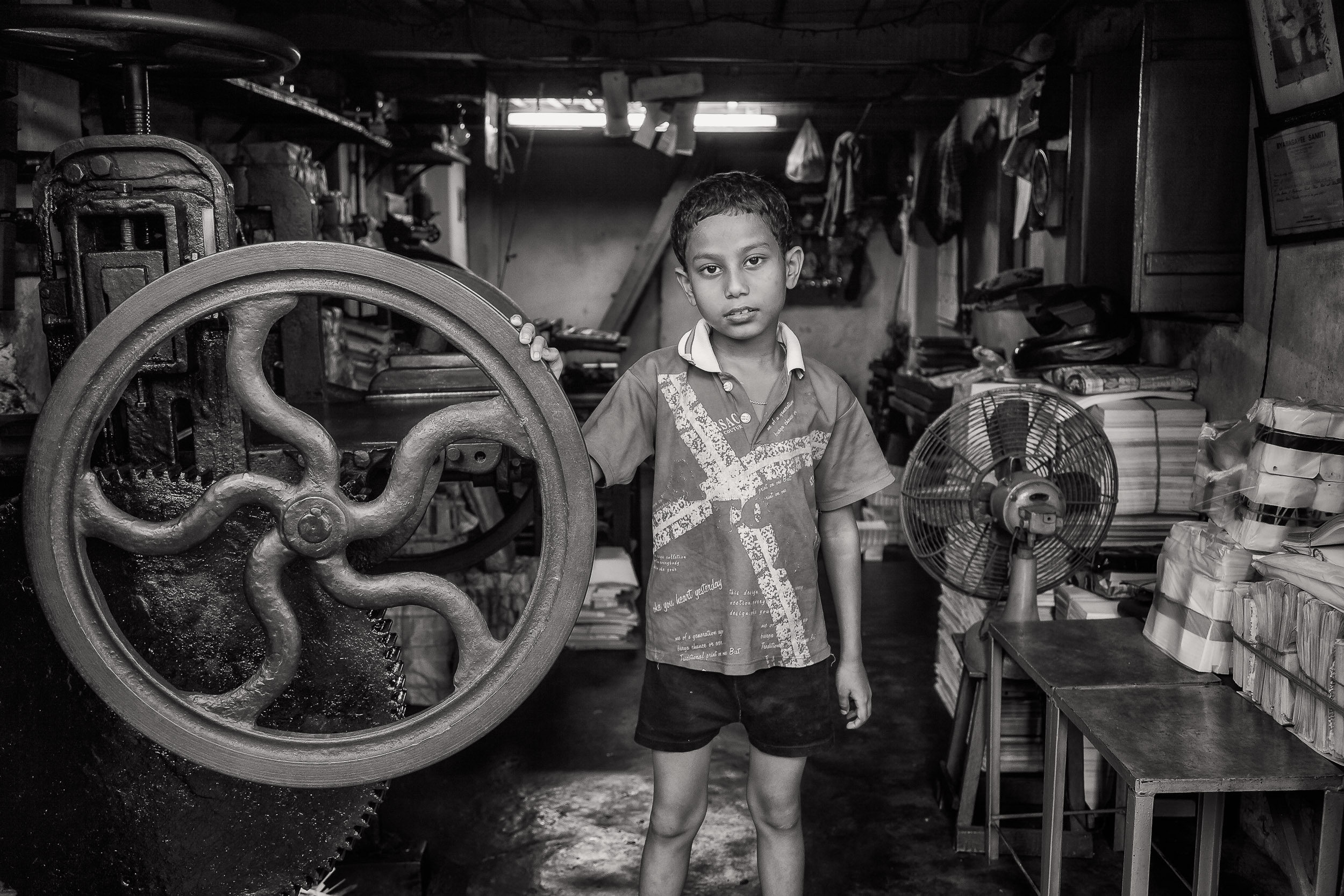 A lovely environmental portrait, in black and white, of a young boy in his father's print workshop in Kolkata, India.

The Connection Between Viewer And Photographer

The kind of person you are (e.g., compassionate, caring, sympathetic, empathetic) is communicated through the photographs you make.

I believe there’s a lot about the photographer that’s revealed through the photos they make. In particular I refer to the following:

I see myself very much as a photo maker, not a photo taker.

The portraits I make are a collaboration between myself and the people I photograph.

I can tell you I'm only interested in making beautiful, life-affirming images that speak to the beauty and wonder of our world and its people. 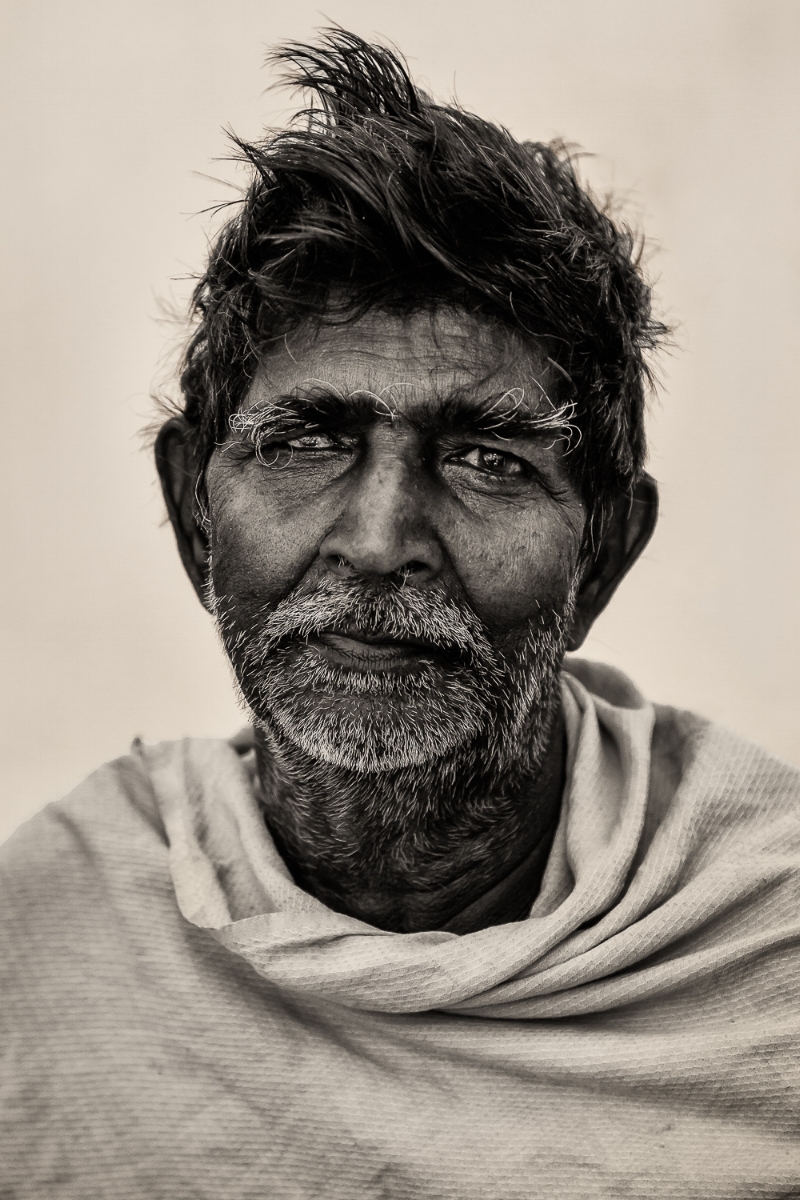 The look of a life very much lived in the eyes of this dignified man in Chennai, India

A Photograph Really Is Worth A Thousand Words

A truly great photograph goes beyond the need for words to describe it.

However, a caption may be useful and, on occasions, informative.

Likewise, an analysis of the image, conducted by deconstructing it and discussing aspects of composition, posing, gesture, context, message, metaphor and meaning can be enlightening.

But, outside of academic lingo and the minute world of photographic criticism, there's something far more powerful that will likely determine the success of your photos.

“It’s the viewer’s initial emotional reaction, coming before words and thoughts, that lies at the heart of a photograph’s success. When you hear the word WOW! escape their lips you know you’ve created something quite special.”

Technique is important and, from my experience, it’s great to be able to talk and write about your own photography and the work of others that you help or are inspired by.

But, to my mind, the ultimate success of a photograph is dependent not upon the words that we use to describe it, but upon its ability to connect, on a deeply personal and emotional level, with our audience.

And that audience is made up of individual, meaning seeking people.

How Shape and Form Come into Play in Fine Art Photography

What sets regular photography apart from fine art photography? Most people will say that fine art differs in that it ...
Read More

Tips for This Summer’s Beach Photography

Temperatures are rising and summer is on its way. If you are a photographer, you’ll probably be heading to the beach ...
Read More

How to Find the Best Locations for Your Photo Shoots

Finding a good location for your photos is contingent on several factors. The most obvious is finding a place that lo...
Read More
Product has been added to your wishlist.
You can view your wishlist by creating or login account.
Please create account through ##customer_email## email
Login Register
×
Welcome Newcomer