Etiquette in photography seems to be lost or ignored. Here’s how I make photos under such difficult conditions.

It’s frustrating when your own photography is compromised by folks walking right in front of you to make their own photo.

Most likely they’ve done so because they saw your fancy pants camera and figured they wanted in on the action.

I have no problem with them making the most of the opportunity I’ve created. I just wish they’d wait until I’d made my photo.

I don’t think that’s an unreasonable position, given I was there first and it’s pretty obvious, by the gear I’m using, that I’m involved in a serious undertaking.

Frustration Must Lead To Action

Standing there with a tripod mounted camera and cable release only seems to make things worse.

There have been numerous times when I’ve stood, somewhat dumbfounded, as each and every member of a family takes their turn at posing for photos while I wait patiently to make my own.

Folks have even set up a picnic in front of the scene I was about to photograph. I kid you not. But you can’t let a frustrating situation get the better of you.

The crowd was huge the day I visited the Temple Of Heaven in Beijing and it was a real struggle making architectural photos that weren’t filled with people.

Nonetheless, I was determined to make some beautiful photos of this sublime and culturally important location.

One solution was to opt for a close up exploration of an amazing building at the heart of the Temple Of Heaven complex.

I concentrated my composition around the richly decorative colors, shapes and textures in the structure.

I think this approach showcases the value of a detailed study and how it’s a good way to avoid including people in your photos. 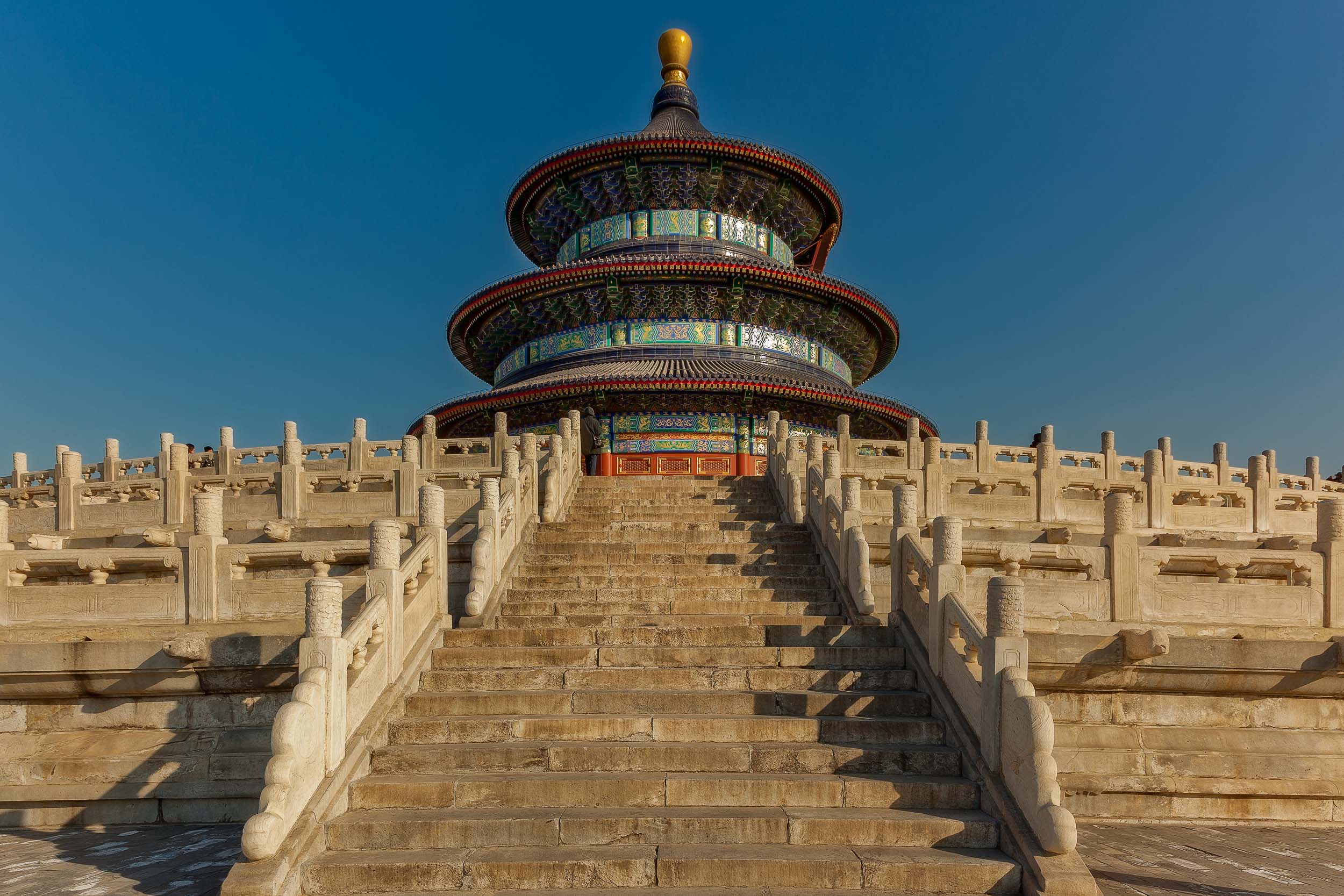 Architectural splendor in the grounds of the Temple Of Heaven in Beijing.

Photography At Historical Landmarks In Beijing

I love the Temple of Heaven in Beijing. It’s a very large complex with many architecturally interesting buildings to photograph.

I consider it to be a much more interesting location for the enthusiastic photographer than the Forbidden City.

However, for variety in your photography and to tell a more comprehensive story of your time in Beijing, it’s wise to spend time (probably half a day) at each location.

I visited the Temple of Heaven in the middle of a cold Beijing winter, though that didn’t seem to stop anyone else.

The place was packed with local tourists. I can only imagine how crowded it must get when visiting in the middle of summer.

I remember walking around this structure several times before I was able to photograph it free of other tourists.

I like the way the flight of stairs leads the eye to the beautiful, round temple on top.

Take a close look at that building and you’ll see the area, under one of the building’s eaves, that formed the image at the very top of this post. 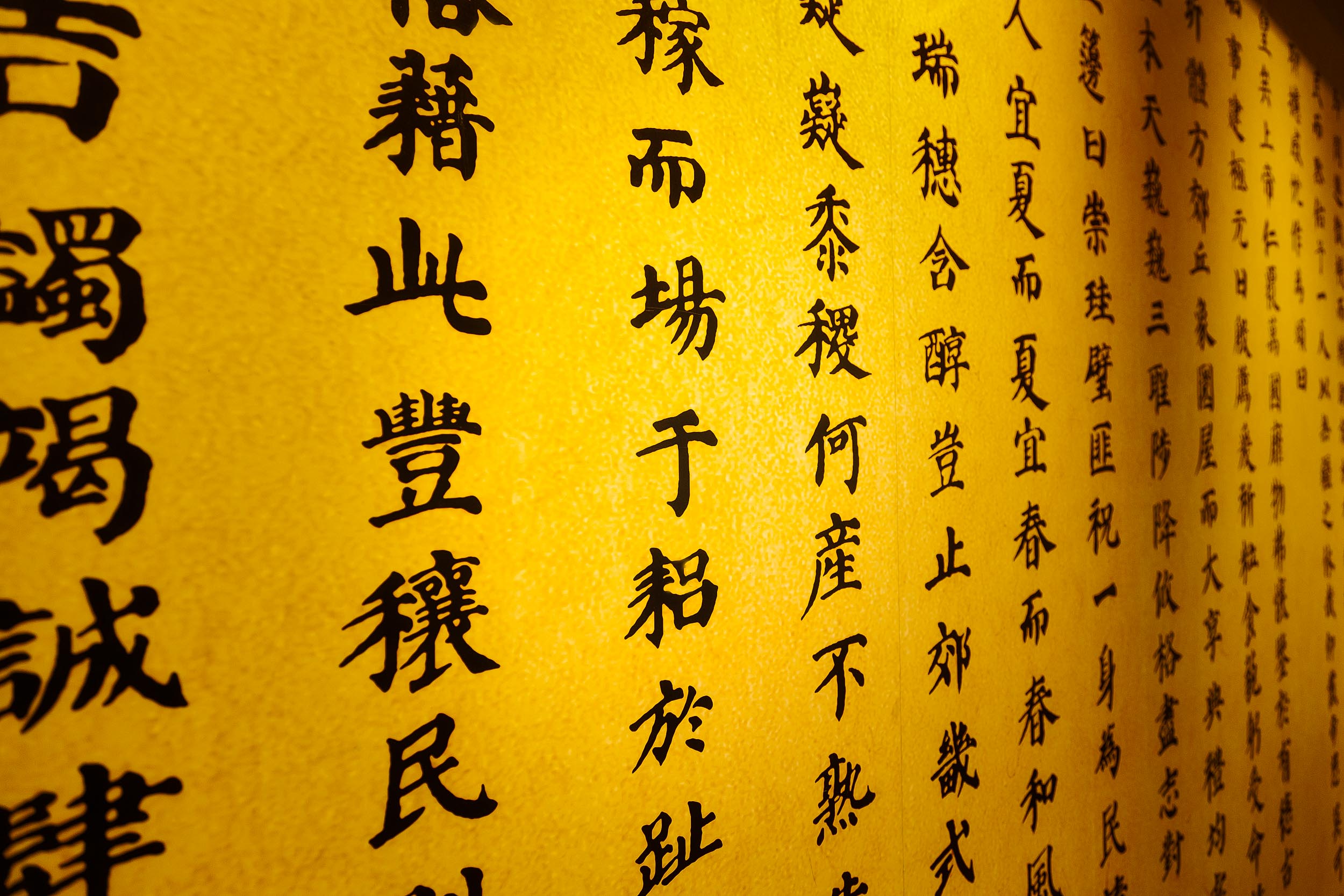 Chinese characters at the Temple Of Heaven in Beijing, China.

Beware Of A Large And Fancy Camera Kit

One of the things I’ve learned over the years is that, with a relatively large and expensive camera kit, you become a magnet for local photographers wanting to make their own photos.

This has happened to me in numerous countries, including my own, so it’s not simply a cultural thing. But it can be a real pain just the same.

When passing through a small on site museum I suddenly found myself amidst a sea of people pushing their way through the space.

I wanted to photograph this panel of Chinese characters, but my opportunity to do so was fast disappearing.

The solution was to move in, as close as I could, and employ a lens with a particularly wide angle focal length.

I made the photo by focusing on the third column of characters and employing a shallow depth of field.

This allowed me to draw attention to that part of the image and avoid the problems often associated with an overly repetitive scene. 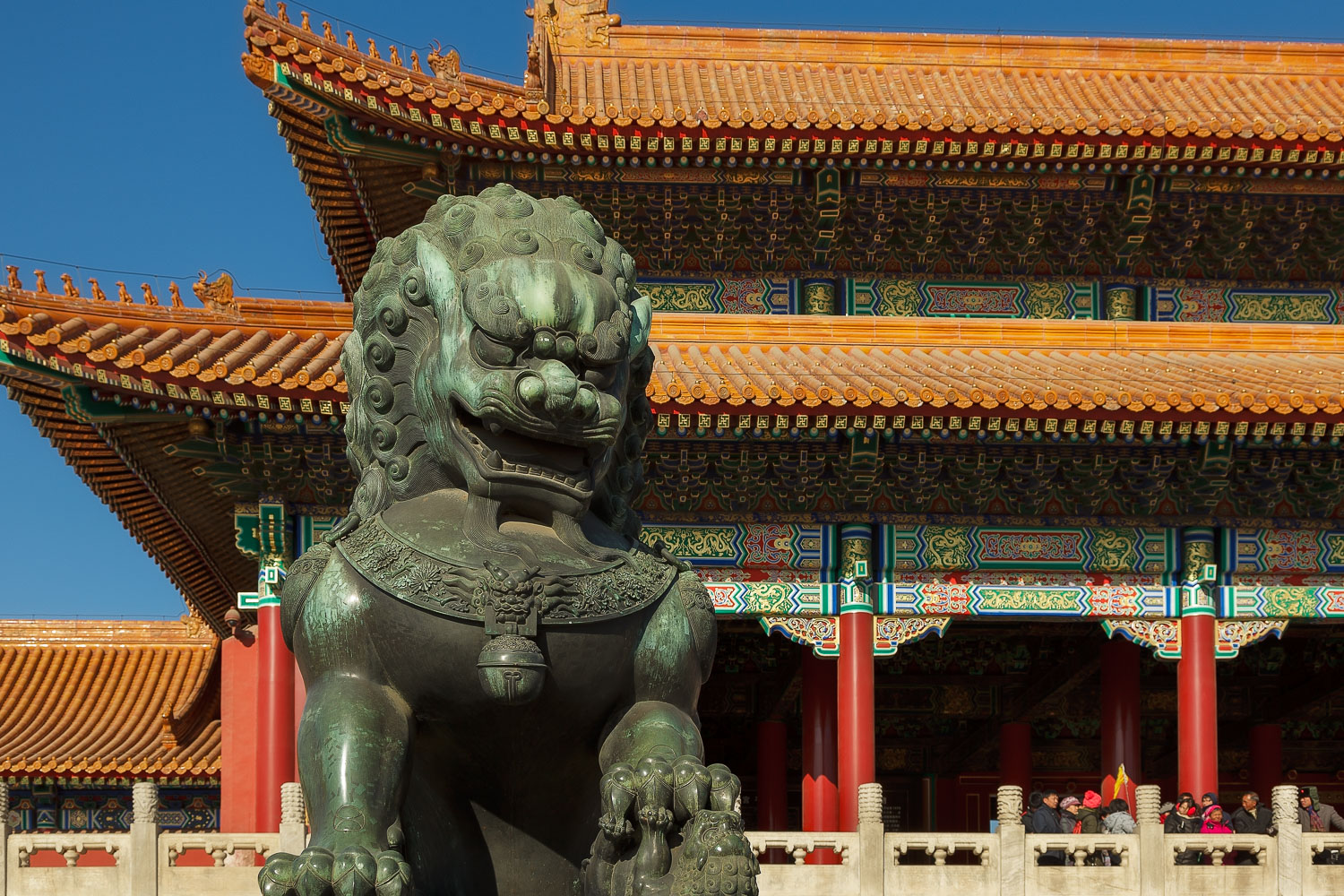 One of the problems that faces an enthusiast interested in architecture or street photography with a great camera kit is that folks conclude that you know what you doing.

Their competitive nature might then cause them to push in on the action.

I have no problems with sharing a location or, through my actions, suggesting a potential photo opportunity for other folks.

I just wish they’d wait, often only a few moments, until after I’ve made my photo before they take over the space.

In certain highly populated countries life can be tough, in the extreme.

I wonder if the lack of personal space that exists in densely populated cities means that my sense of good manners and etiquette is simply not relevant.

As is so often the case it’s good to be culturally sensitive, but you have to balance that with the need to make your own photos.

In my case photography is the very reason I’m there which increases my desire to make great photos each and every day.

Sometimes you just have to sit it out until the people in question have moved on. Other times you’ll need a more assertive approach.

Perhaps a simple, but firm explanation of what you’re doing and a request that they “hold on a minute before you move in front of my camera” is all that’s required.

I’ve found that, on occasions, it can help to take responsibility for the problem.

Sometimes I take the circus out of town by simply walking away.

After I’ve gone the crowd dissipates leaving the site free for me to re-enter and make my photos. 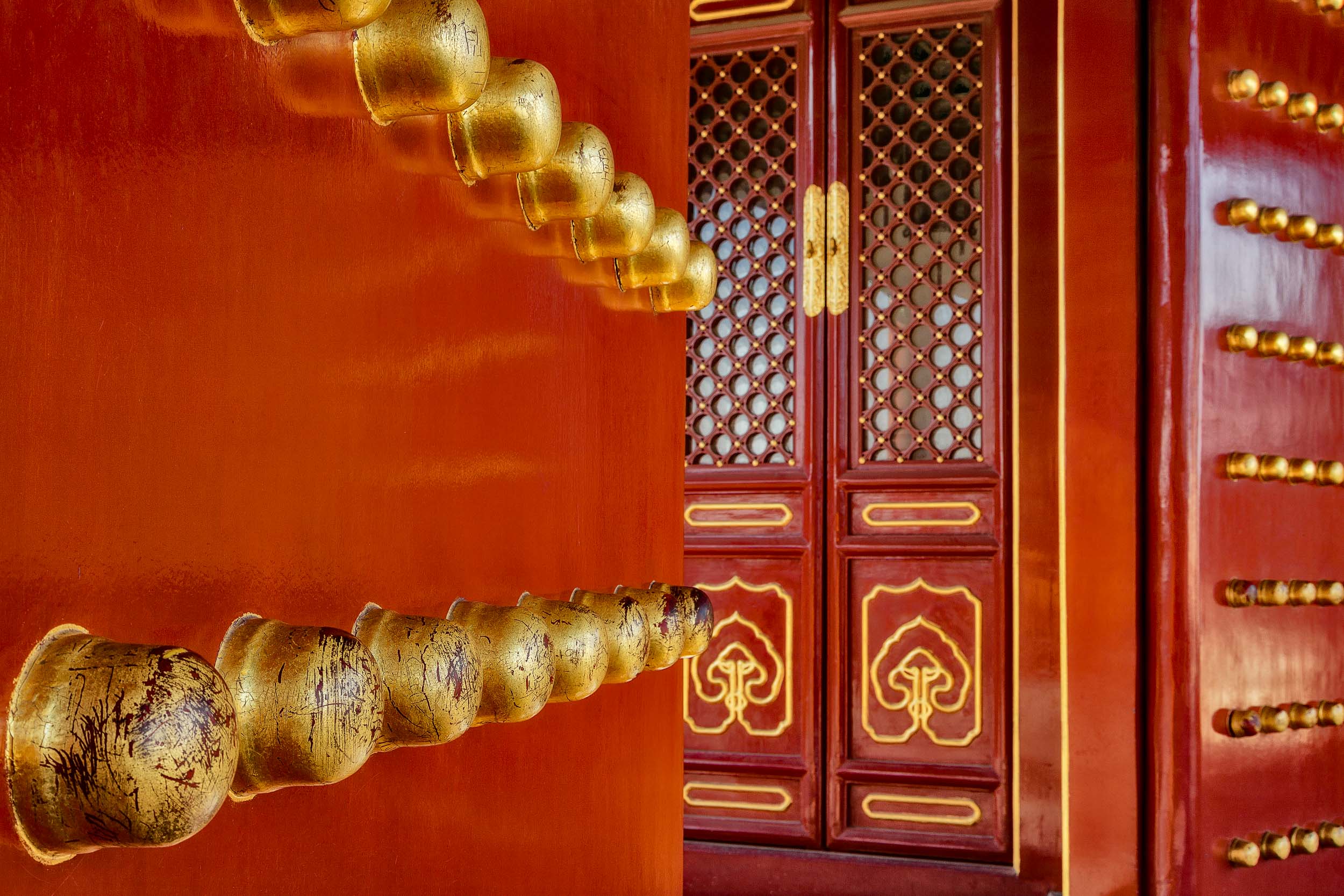 Large brass knobs and door at the Temple Of Heaven in Beijing.

Control The Space You Photograph In

My wanderings around the Temple of Heaven brought me to this beautiful door.

True to form, no sooner had I brought my DSLR out than the hordes descended, standing in front of me to make photo after photo.

After waiting for about 10 minutes I decided to move away and look for other things to photograph.

Fortunately, I was able to return to make a photo, very quickly, before a new crowd of local tourists pushed in on the action.

I’m patient and I do try hard not to hog a location or block anyone’s passage through a space.

I’II usually wait it out in the hope that the crowd will move on. But after many years of photographing under these conditions I’ve developed a pretty good sense of the mood and intentions of the crowd.

Somedays you know you just can’t out wait them and the best option is to move on. If you’re lucky you’ll get to the next site before the crowd catches up to you. 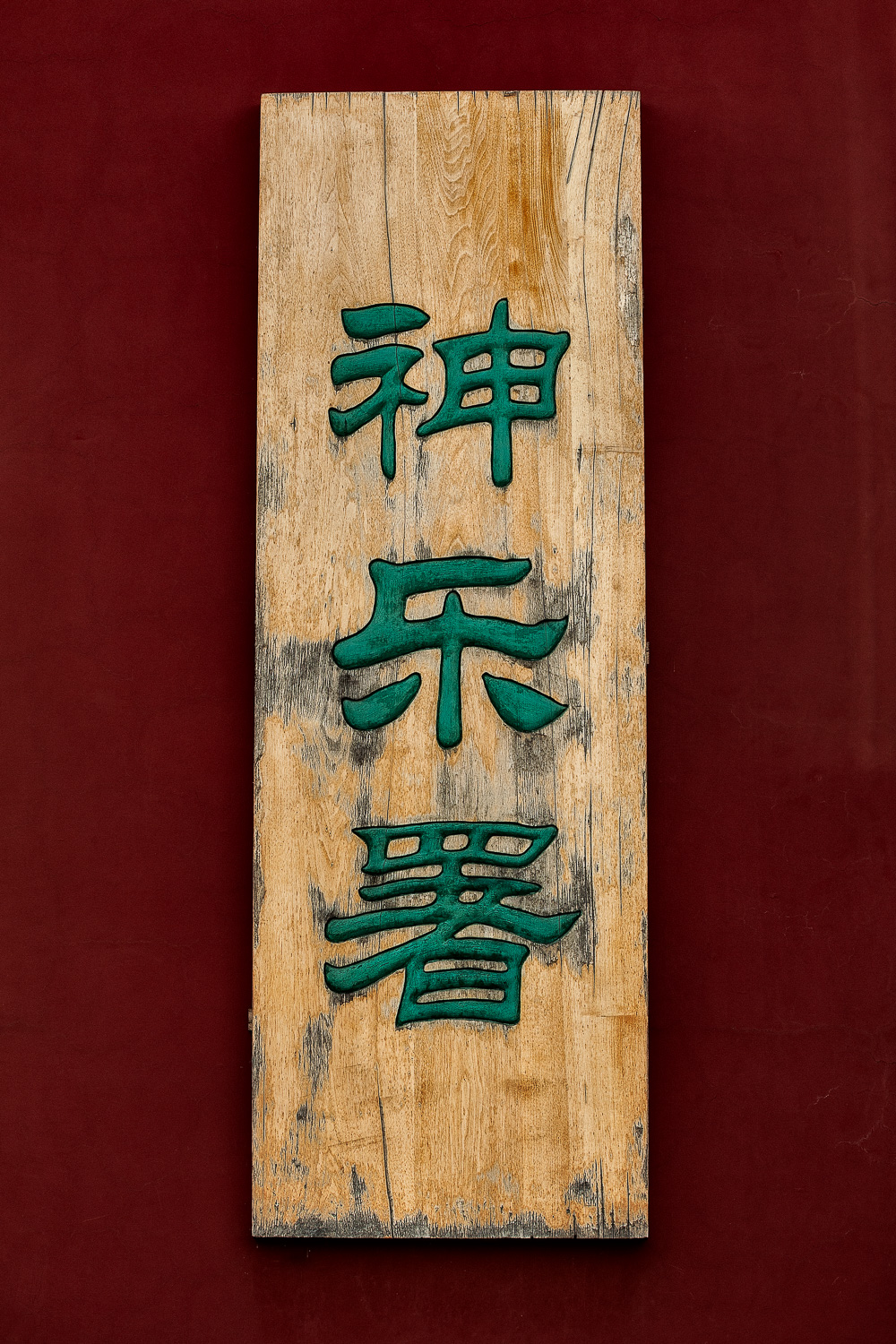 Green Chinese characters and red wall in the Temple of Heaven, Beijing.

Move In Close To Make Your Photos

While at the Temple Of Heaven I noticed this beautiful, highly textured sign featuring vividly colored green characters against a red wall.

I love the luminous quality of the wood and how the warm/cool color contrast between the Chinese characters and the wall make for a dramatic composition.

Before the crowd arrived I immediately moved in close to the sign and made my photo. I was finished and on my way within a minute or two.

One advantage of moving close, as opposed to simply zooming in, is that you make it hard for folks to walk in front of you.

If they want to make their own photo they’ll have to do so from behind you or, and here’s a radical concept, wait until you’re finished.

Likewise, by photographing nice and close to the subject in question folks will feel uneasy about walking in front of you.

The natural thing would be for them to walk behind you. And, nine out of ten times, that’s exactly what they’ll do.

This technique works brilliantly when photographing street art, particularly when you want to document lots of individual works along a laneway wall.

I find this technique works a treat.

What’s more, by moving in close you often have to resort to a wide angle focal length which tends to exaggerate line and shape, particularly when photographed side on to your subject.

This approach will often result in more visually dynamic images and I encourage you to try it out for yourself.

In fact I’ve written a special blog post titled Abstraction Photography - The Guide which I’m sure you’ll find to be a fascinating read.

It’s such a simple technique that will allow you to make your photos more quickly and without too much fuss. It may also make the whole experience of photographing the location much more enjoyable.

Look For Beauty, Be Agile And Stay Nice

I’m convinced that, like me, you’ll find the process of making photos so much more rewarding when you focus on beauty and maintain a positive attitude and mindset.

Be polite and treat people around you with respect and, more often than not, they’ll respond in kind.

Photography doesn’t need to be a combative process. It should be fun but, sometimes, you’ve got to earn your fun. And it all starts with mindset and the reasons why you’re making photos in the first place.

How To Deal With An Ugly Portrait Background

One defining factor that controls the success of a portrait photo is the background. Here are some great ways I’ve fo...
Read More

Photography and Travel in 2021

Have you had to delay your travel plans because of the COVID-19 pandemic and will travel be safe again in 2021? The ...
Read More
Product has been added to your wishlist.
You can view your wishlist by creating or login account.
Please create account through ##customer_email## email
Login Register
×
Welcome Newcomer