Dramatic portrait lighting can really intensify the emotive quality of an image.

I used side light to photograph this monk in the beautiful UNESCO heritage town of Luang Prabang in Laos.

The image was made on a 35 mm Leica M6 camera with a Leica 35 mm f/2 Summicron-M series lens and Kodak color negative film.

The negative was scanned and then rendered into black and white on the desktop.

The advantages of side lighting can be described as follows:

Whether it be portraits, landscape or architectural photography the application of side light is a great way to bring out shape (e.g., heads, rocks, leaves, architectural elements) within an image.

Enhance Texture With Side Light

I photographed the monk in the town of Luang Prabang in Laos, inside one of the town’s wonderful Buddhist temples.

“The brighter the light, the darker the shadows will photograph.”

To avoid a typical split light effect, with one side of the face bright and the other very dark, I simply gestured to the monk to turn his face, ever so slightly, towards the light.

By doing so the light was able to wrap around (that’s the technical term) past his nose and, by pushing the shadows back, illuminate much of the darker side of his face.

You can see how side lighting has enhanced the shape of the monk’s head and brought out delicate textures on his face and robe. 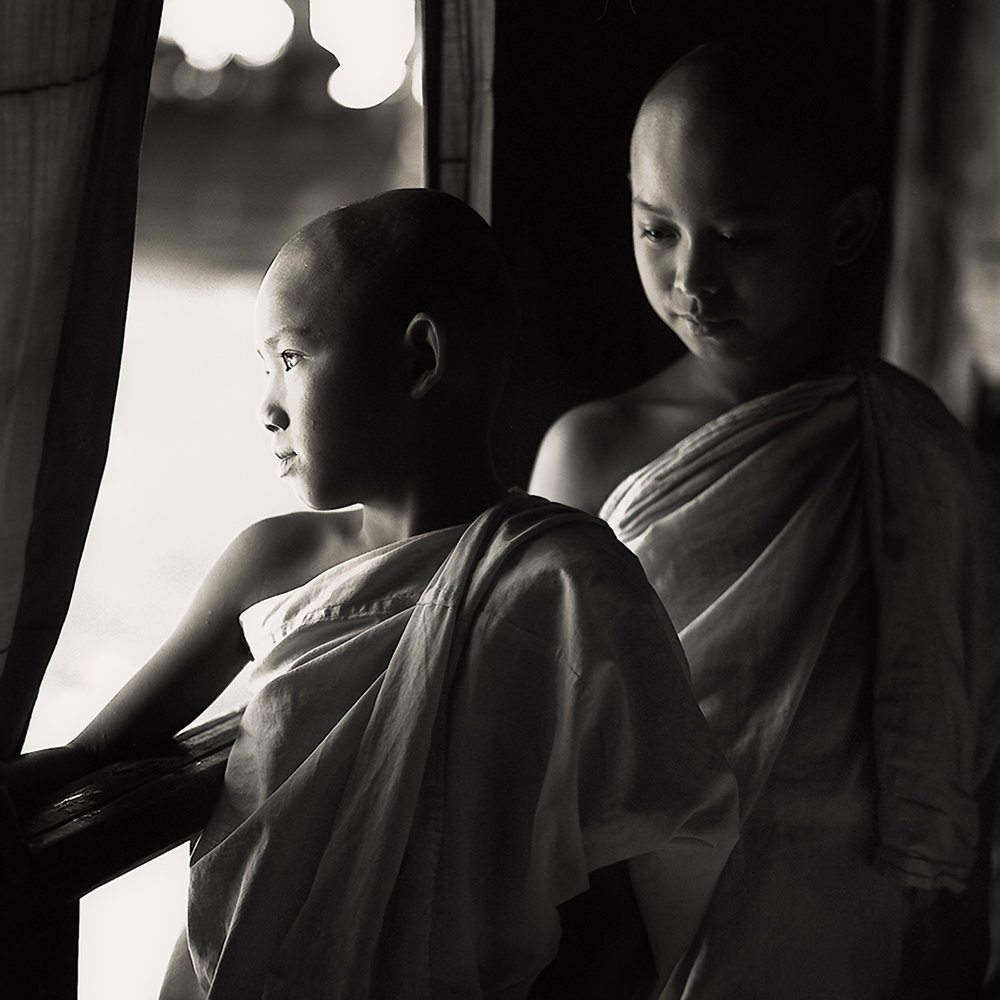 Two young novice monks, lit by side light, standing on a verandah in a monastry in Myanmar.

It’s supposed to look totally natural but, in reality, every aspect of the image, including the expressions on the boys faces, was created through the interactions between photographer and subjects.

Some might call the photo a fake. The fact is intervention and cooperation are at the heart of art. There’s just so much more to this image than shutter speed, aperture and ISO.

It was an extremely bright and hot day. The verandah on which the photo was made offered relief from the heat and also put most of the monks into what’s referred to as open shade.

I asked one of the novices to turn towards the light and then to move his gaze so that, from the camera’s position, it looked like his pupils were in the centre of his eyes and that he was looking directly ahead.

Without that simple illusion the whites in his eyes would have dominated and the whole mood of the image would have changed.

I made the image with a medium format Hasselblad camera and 120 color negative film. The negative in question was scanned and the original color image rendered into black and white on the desktop.

The dynamic range of the scene was extremely high, which was problematic.

I encouraged the novice in the front of the image to look towards the light so as to create a more even transition between the light on his face and the bright, out of focus courtyard he’s positioned against.

I believe that decision has overcome what would otherwise have been an unacceptably bright background.

Candid Photos - What Would You Do?

It's an achievement to have the courage to approach a stranger and ask permission to make their photograph.

Every time your subject says yes you have the opportunity to make a beautiful, life affirming photo. That represents a win for all concerned:

So why diminish your chances of success by not taking control of the situation and providing the necessary direction to make a truly compelling photo?

It’s often simply a matter of saying something along the lines of “please stand here, could you turn your head this way, etc”.

Is it a lack of confidence in your abilities as a photographer or fear of rejection that prevents you from taking control of the situation and controlling the quality of the image?

Great photographs are made by photographers who simply have no choice.

They recognize the opportunity presented to them and are motivated by past experiences (likely failure as much as success) and the result they hope to achieve.

The alternative, to make a photo that is below standard, is simply not acceptable.

Ten Great Ideas for End of School Year Photography Spring is the season for graduations. Kindergarten students will b...
Read More
Product has been added to your wishlist.
You can view your wishlist by creating or login account.
Please create account through ##customer_email## email
Login Register
×
Welcome Newcomer