BORACAY ISLAND, Philippines — The resort island of Boracay is showing signs of recovery, thanks to an ongoing rehabilitation and the COVID-19 pandemic, which closed off the island from tourists.

Authorities and residents have reported the return of seashells on Boracay’s beaches and sightings of scop owls (Otus megalotis) — signs they say show the island is slowly but surely recovering.

But its underwater ecosystem tells a different story: local officials fear the island’s coral reefs are badly affected by an invasion of crown-of-thorns starfish.

Among the largest starfish in the world, crown-of-thorns starfish (or COTS) are a bane for the hard, stony corals that they feed on, says Haron Deo Vargas, a local marine biologist.

Coastal and agricultural runoff are the primary drivers for a surging COTS population. Overfishing of its fish predators can also trigger an outbreak, as can an increase in the water temperature. But whichever the case, a COTS infestation points to an unhealthy reef ecosystem. 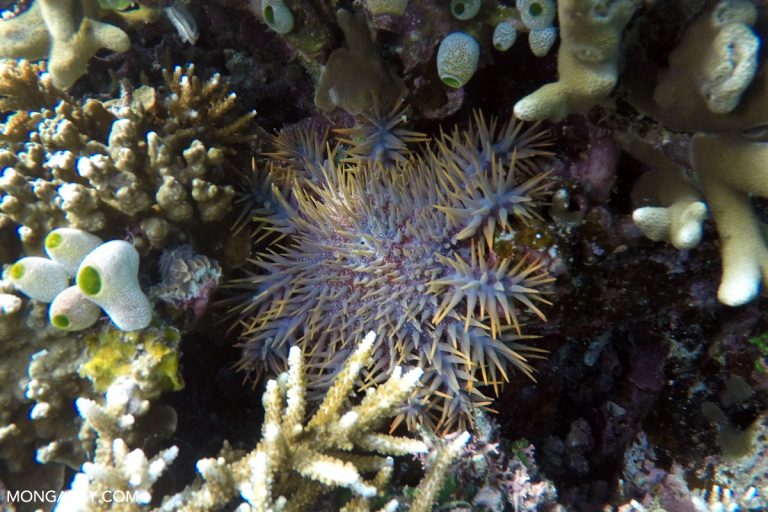 Crown-of-thorns sea stars have led to the decline of many coral reefs. Image by Rhett A. Butler/Mongabay

Vargas, who also works in the government-run Community Environment and Natural Resources Office (CENRO), tells Mongabay that he’s received reports from fisherfolks of these undersea attacks for several months now. For the past four months, he’s been unable to confirm the reports due to the lockdown imposed to contain the COVID-19 pandemic.

The CENRO office was only able to confirm a possible outbreak on July 6, after the Department of Tourism allowed it to conduct dives to check up on the corals amid ongoing lockdown measures.

This directive came after the island was allowed to reopen to local tourists, the main driver of the local economy.

Vargas’s group secured a permit from the local government and confirmed that the reports were correct: the crown-of-thorns starfish are proliferating in Boracay’s reefs.

But diving to check on the corals isn’t enough, Vargas says. “Even if we were allowed to go diving, our resources are limited at this time and we lack manpower from the pool of divers,” he says. “Many of our volunteer professional divers have returned to their provinces and cities soon after the COVID-19 pandemic. They won’t return here to help.”

This isn’t the first time Boracay’s reefs have suffered from a crown-of-thorns infestation. Vargas says an outbreak occurred in 2018, which covered Boracay’s corals and its outlying areas. In July last year, the nearby waters of Culasi on the nearby island of Panay also saw a crown-of-thorn outbreak that spread into the neighboring tourist islands of Mararison and Maniguin.

This year, similar outbreaks are being reported in nearby Tangalan, a boat ride away from Boracay, says environment officer Glenda Sanchez. Like Boracay, the coastal town has white sand beaches and is having difficulty monitoring its marine resources due to the lack of volunteer divers. 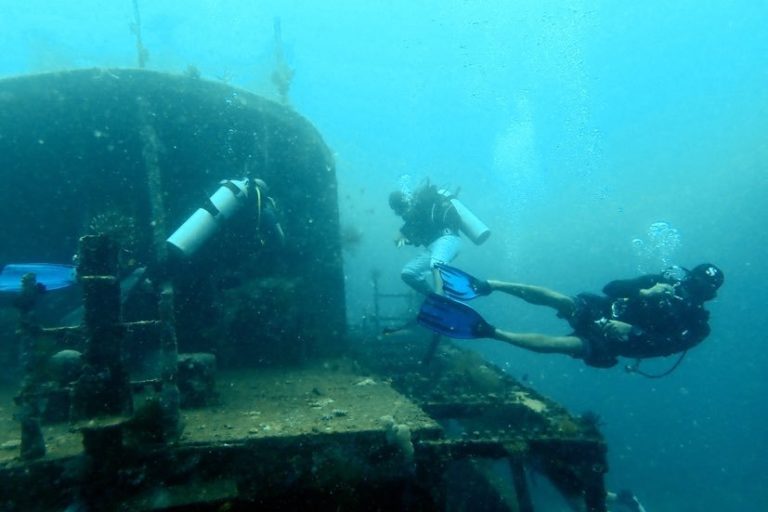 A group of divers inspects a sunken vessel in Boracay to see if they hid destructive crown-of-thorns starfish. Image courtesy of DiveGurus

To tackle the outbreaks, divers pick up each crown-of-thorns off the reef, says Mylen Arboleda of Dive Gurus, a member of the Boracay Association of Sport and Scuba Diving (BASS), which helps monitor the condition of Boracay’s reefs.

“Back in 2018, we collected more than 15,000 kilos [33,000 pounds] of the crown-of-thorns after a one-month relentless campaign and operation,” she says. This time, however, the pandemic means that most of the volunteer divers are not on the island.

Vargas says the only solution he can see is to train another set of divers and also engage fisherfolks in keeping the crown-of-thorns at bay.