I have vivid memories of working, as a stills photographer, on the Australian motion picture film Summer Coda during a particularly hot summer.

Most of the film is set in and around the city of Mildura in far northwest Victoria.

The film was somewhat of a family project with my nephew, Richard Gray, writing and directing the project. Richard’s wife, Michele Davies, was responsible for continuity and dialogue.

Towards the end of the project Richard’s family: his mum Maree, sister Rachel, their partners Trevor and Dean, and brother Pat spent a few days in Mildura. 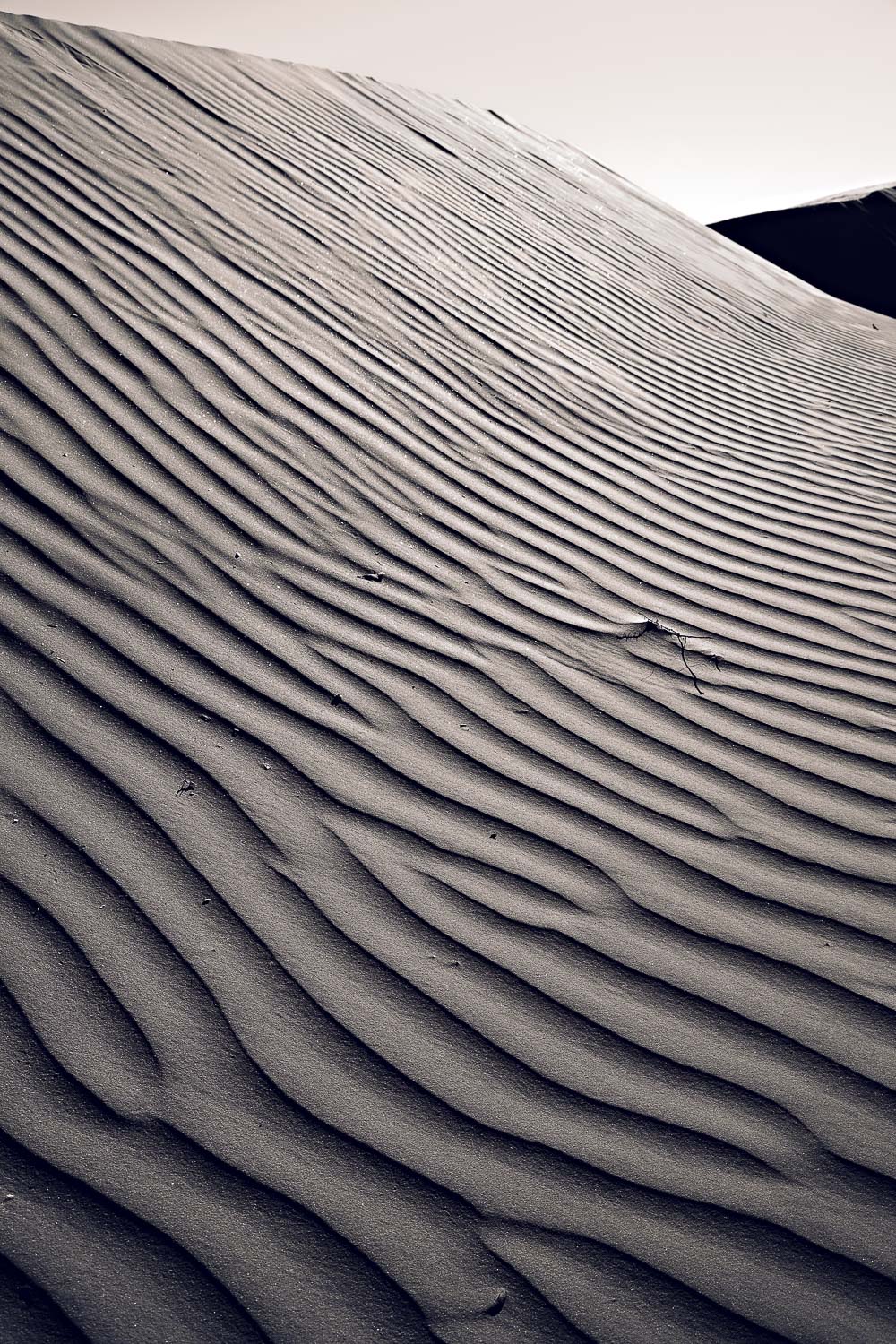 Photography Opportunities At The Perry Sandhills

On a rare day off for me we all crossed the border into NSW and visited the Trentham Estatevineyard for a lovely lunch after which I took Rachel, Dean and Pat down the Silver City Highway, past Wentworth where the famous Murray and Darling rivers meet, and out to the Perry Sandhills.

The image at the top of this post features, from left to right, Rachel, Dean and Pat surveying the surrounds from atop the first dune.

I love the warm colors provided by the late afternoon sun and the way they contrast with the blue sky.

The shape and texture of the dunes are important design elements, although they’re somewhat diminished by the footprints, particularly on the right side of the frame. 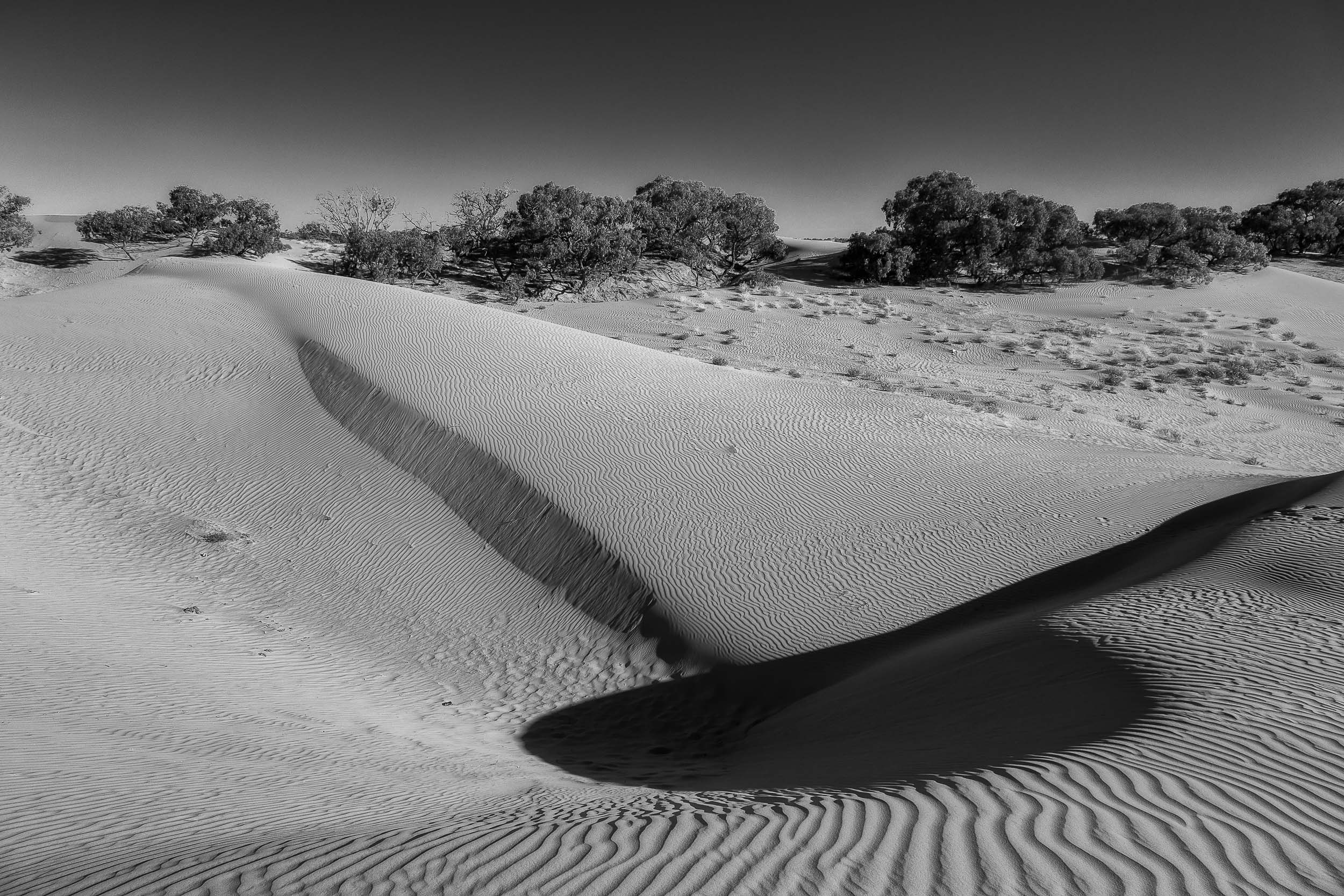 Abstract shapes and textures at the Perry Sandhills in South Western NSW, Australia.

Leave Only Footprints, But Not In A Photo

Here’s an important point to remember. If you’re a landscape photographer, looking for a portfolio standard image, be sure not to walk into the frame until after you've made your image.

Occasionally footprints can add a narrative element to the image, but usually they become a visually messy distraction.

The dunes at the Perry Sandhills are actually quite small. You can gain a good overview of them by leaving your car in the second car park and, after about one minute of exertion, cresting the first dune.

We arrived in the late afternoon. It was hot, but the light Iooked very promising.

I would have been happy to wait an extra hour or so and photograph at sunset and dusk, but I had to get the family back to Mildura to see the rushes (i.e., a rough cut of important scenes filmed throughout the week) with Richard, Michele and members of the crew.

Our visit to the dunes was probably 40 minutes in duration, including the 20 minutes Dean spent trying to help a bunch of folks move their car that, somewhat miraculously, they’d succeeded in bogging in soft sand at the very entrance to the car park.

In the end, with plenty of other folk around to help, we got out (I had a 4-wheel drive back then) via a hidden track out of the carpark.

The lesson, if you decide to visit the Perry Sandhills, is that a low to the ground, hotted up car may not be the best option. 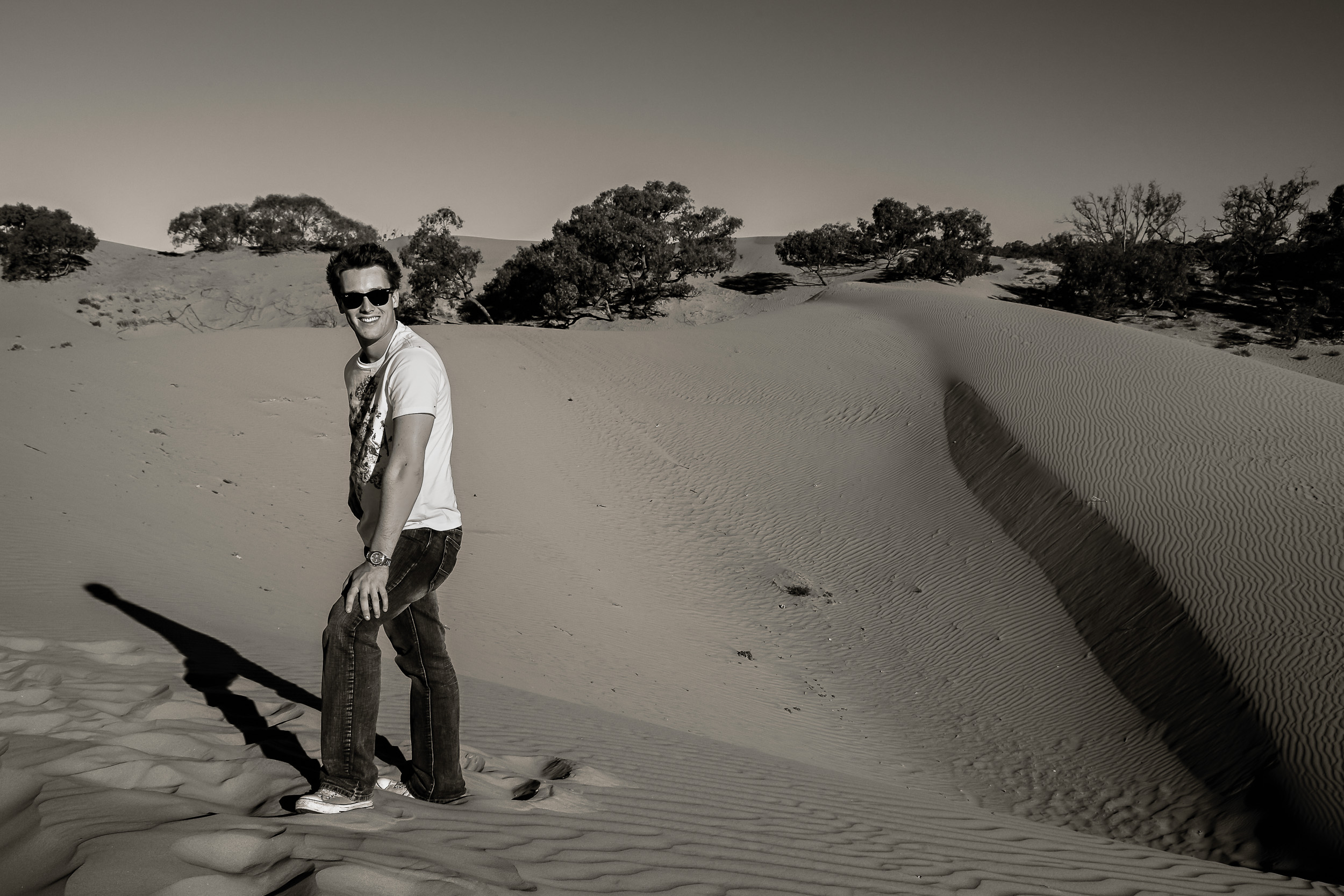 Guitarist and teacher Patrick David Gray amonst the long shadows and soft light at the Perry Sandhills in NSW, Australia.

How To Photograph A Good Guy

The second image features Pat (i.e., Patrick David Gray) at the dunes. I tried to echo the strong shape of his shadow, cast by the low angle of the late afternoon sun, with the V shape of two intersecting dunes on the bottom right corner of the image.

In this case I believe the warm tone black-and-white rendering and the relatively deep (i.e., dark) tones present in the background add a powerful mood that contrasts with Pat’s always happy and positive nature.

Duality Is At The Heart Of Heart

I feel this duality (i.e., the contrast between two opposites) to be what lifts an image like this from a snapshot towards art. It’s where the intention of the maker (i.e., the artist) goes beyond producing a pleasing likeness of the subject.

I’m not saying that I’ve created great art with this environmental portrait of Pat. What I’m trying to outline is something of the process by which an artist makes art and that good photos, even family photos, can bridge the gap between the snapshot and art.

In fact, when well crafted and made with serious intent, family photos can become art.

What Goes Into Making A Great Photo

There are certain concepts and elements of technique and design that need to be considered whenever a painting, a musical score or a photograph are produced. These include the following:

If you fail to consider most of these the resulting image will likely disappoint, at some level, you and your wider audience.

But if the image lacks meaning, either in your eyes or those of the viewer, then it will remain a snapshot.

Ultimately it’s for you to decide whether you like these photos or not, and whether you’d describe them as holiday snaps or something more.

However, a well crafted and meaning rich image will likely connect with a greater audience, beyond the immediate family and friends of the subject depicted.

With a long-time obsession with royalty and titles like Queen and Duchess, Americans are familiar with government pos...
Read More

No other medium in art allows people to see the world from different perspectives like photography does. Photographs ...
Read More
Product has been added to your wishlist.
You can view your wishlist by creating or login account.
Please create account through ##customer_email## email
Login Register
×
Welcome Newcomer