It was an execution that defined an era. On January 21, 1793, four days after he had been convicted of high treason and crimes against the state by 693 of the 721 deputies of the National Convention, King Louis XVI was guillotined. The gruesome event took place on the Place de la Révolution (formerly the Place Louis XV, soon to be the Place de la Concorde) and came to represent, both in France and abroad, the changing nature of the French Revolution.

Of course, the way artists at the time depicted Louis XVI’s execution depended on their own political convictions — or, lacking those, the political convictions of their patrons or audience. The primary sentiment many throughout Europe felt was fear that this act of violence was a prelude to others. This is clearly evident in the English print Hell Broke Loose, where a swarm of devils beat drums and blow trumpets among the free-floating words Ça ira (“It’ll be fine”, an emblematic song of the French Revolution) and Vive la Nation (“Long live the nation”).

The English cartoonist Isaac Cruikshank emphasized the brutality of the execution by first portraying it inaccurately but symbolically, in a picture that has the Duke of Orleans (who, though he supported the Revolution, would be guillotined ten months later) holding an axe over Louis’ head while Marie Antoinette (who would be guillotined nine months later) pleads for mercy. Within a few days, another Cruikshank cartoon was published in which Louis is depicted as a martyr standing beside the guillotine, whose newfangled workings (the beheading machine had only been invented the year before, in 1792) are explained. 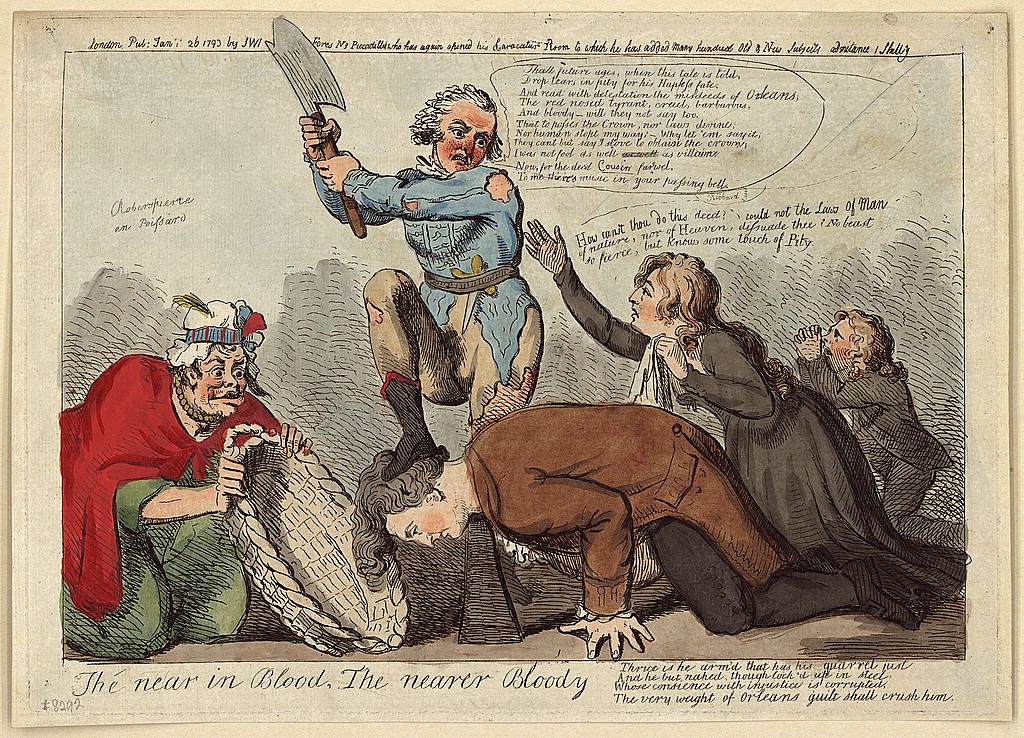 The Near in Blood, the Nearer Bloody, etching by Isaac Cruikshank, January 26, 1793 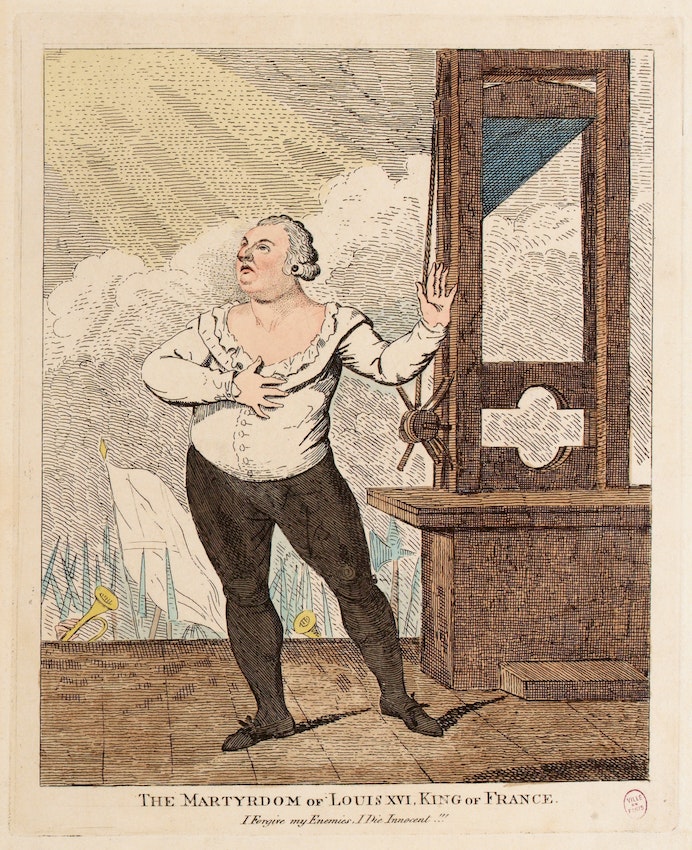 The Martydom of Louis XVI, King of France — I forgive my enemies, I die innocent!!!, etching by Isaac Cruikshank, February 1, 1793

Horror at Louis’ execution was in fact frequently mixed with horror at the efficient modern machine by which the execution was carried out. This double horror often took straightforward form, especially in English prints of the 1790s: 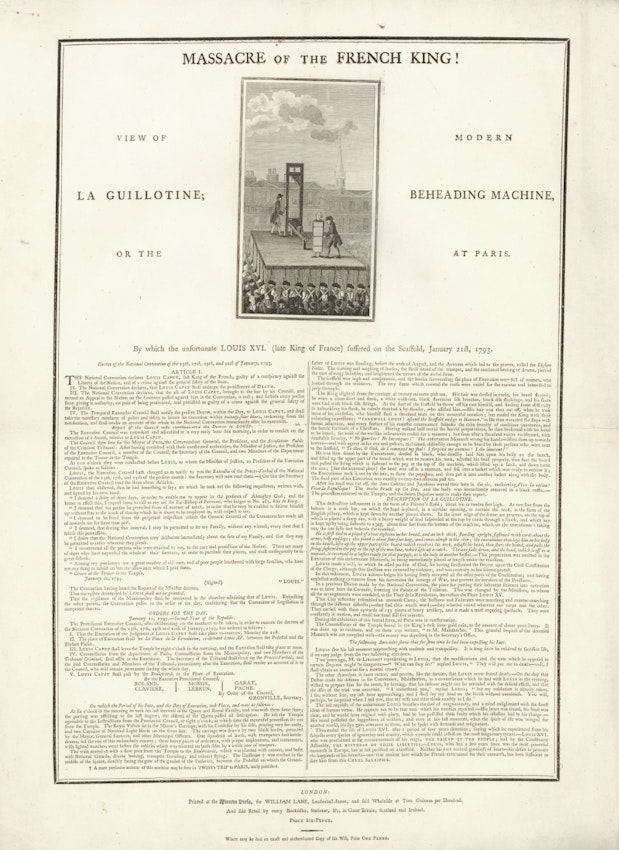 Massacre of the French king! View of la guillotine; or the modern beheading machine, at Paris. By which the unfortunate Louis XVI ... suffered on the scaffold, January 21st, 1793, broadside with woodcut printed for William Lane, London, 1793 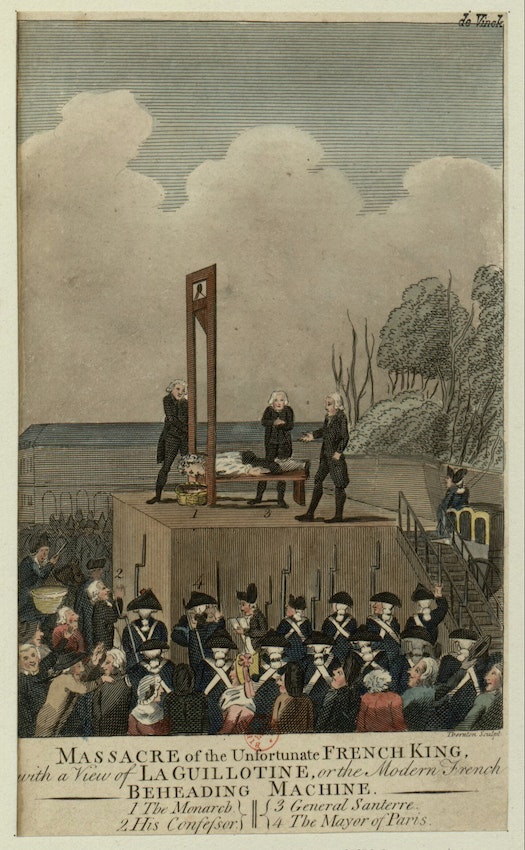 Massacre of the unfortunate French King, with a view of la guillotine, or the modern French beheading machine, (English) artist unknown, 1793

Certain French artists took a more sardonic view — for example, in this cartoon where below the crown it says “I am losing a head” and below the guillotine “I am getting one”: 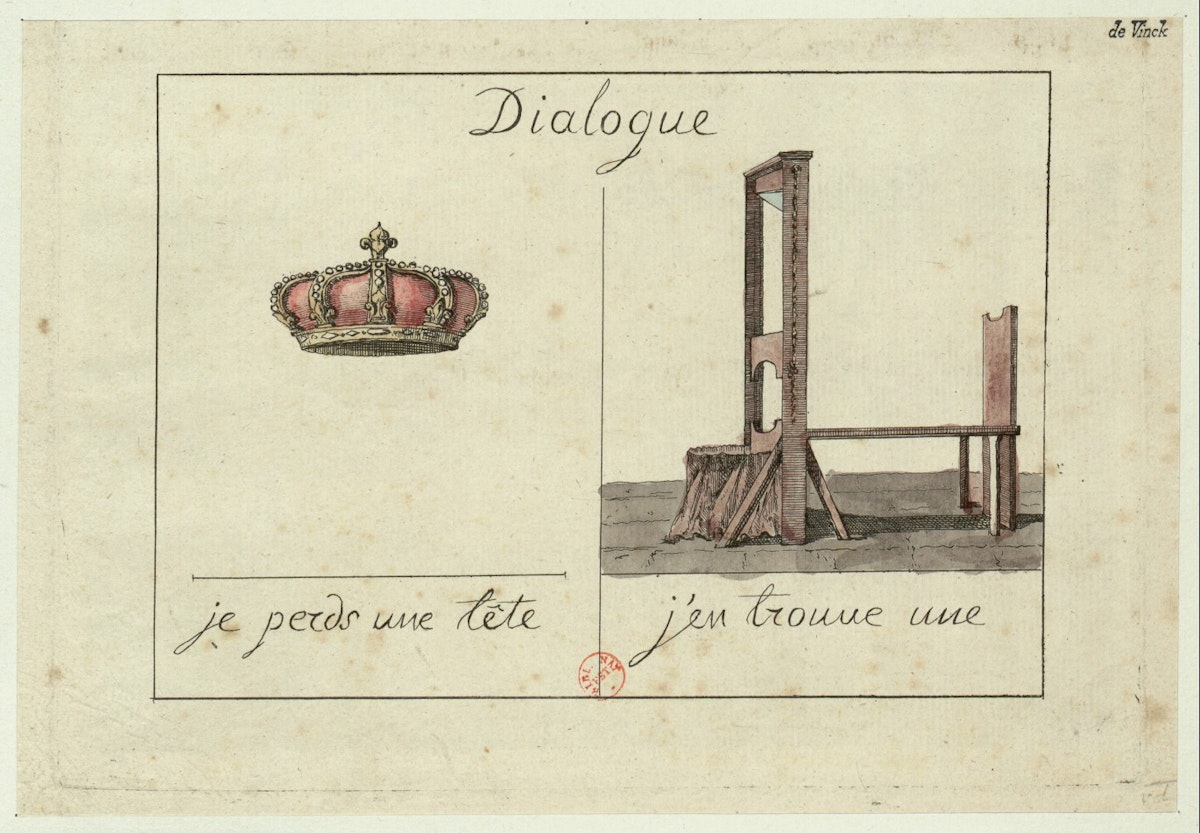 The view of Louis as a martyr was shored up by many French engravings — and by the English painter Charles Bezanech, whose images of Louis on his way to the scaffold quickly became iconic for the royalist cause. While Louis is portrayed as a Christian family man bathed in celestial light, his executioners are shown in rigid poses with eyes averted from the viewer. The even more rigid guillotine looms large — albeit discreetly, so as not to distract the viewer from the king — in the background. 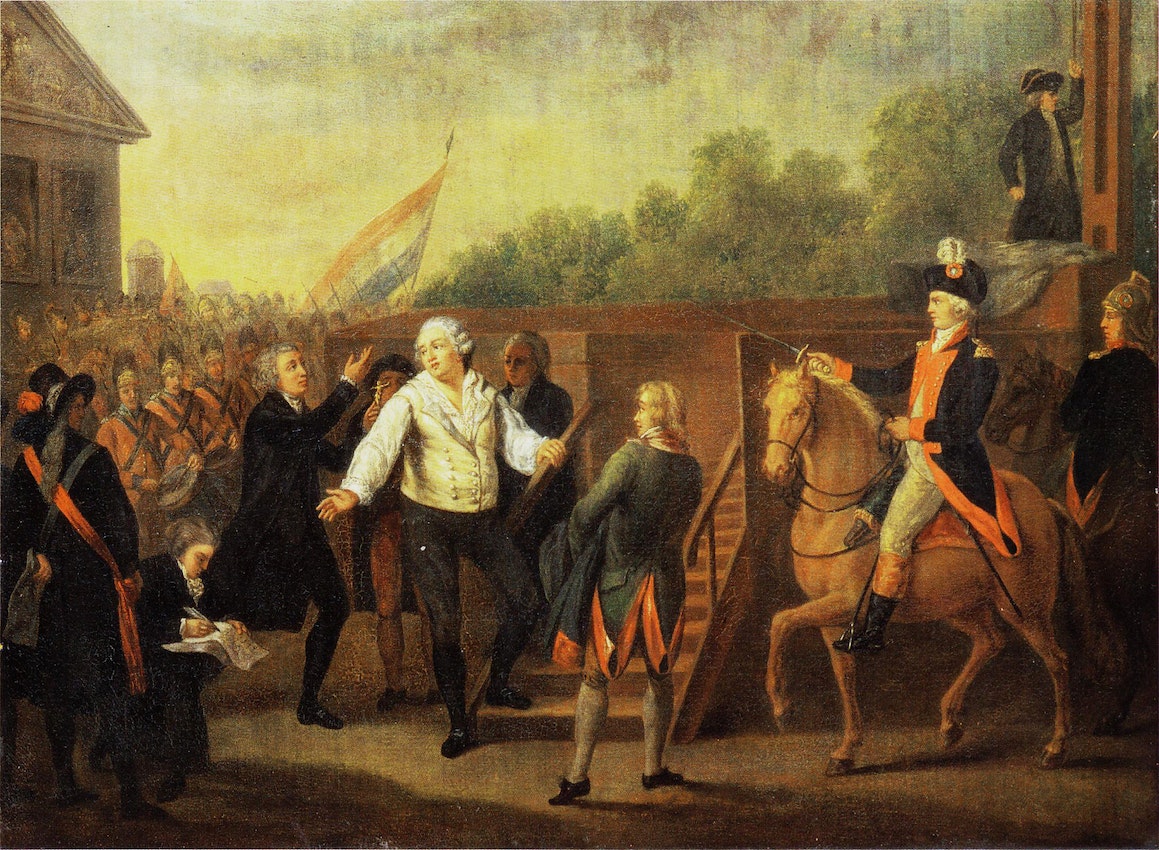 Charles Bezanech, Louis XVI at the Foot of the Scaffold, 1793 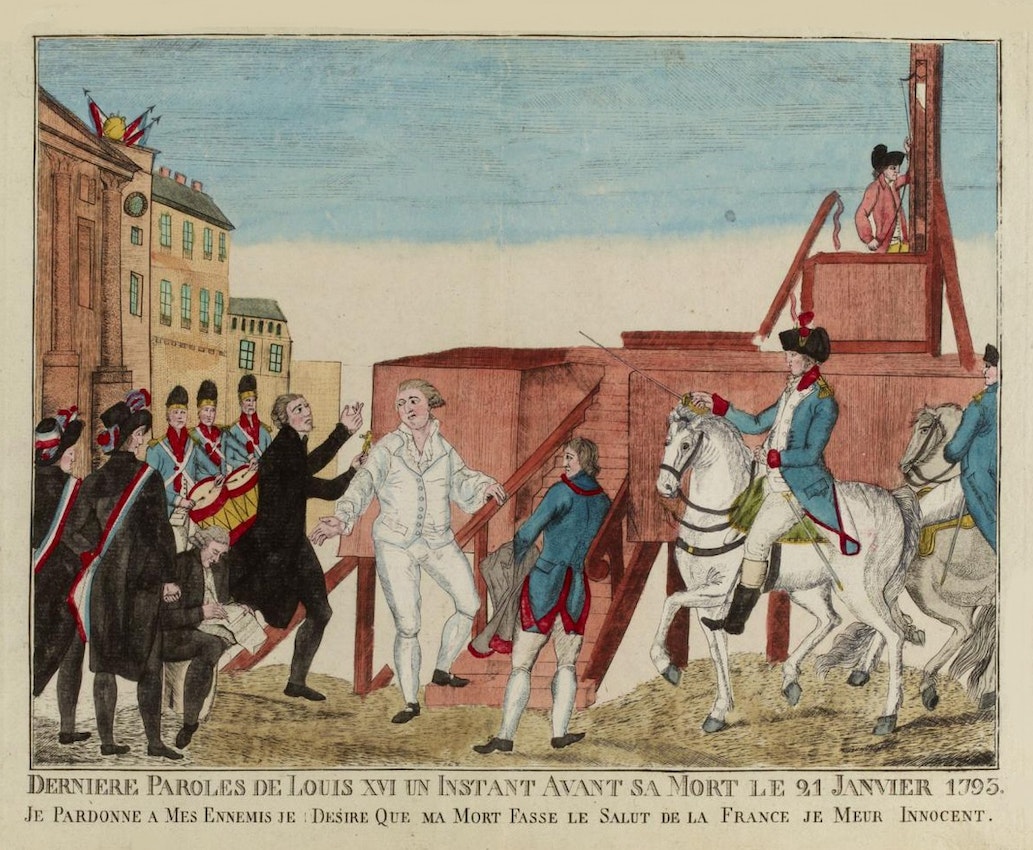 Last Words of Louis XVI an Instant before His Death on January 21, 1793: “I forgive my enemies. I hope my death will bring France salvation. I die innocent”, depicting the king speaking to his confessor, the Irish Catholic priest Henry Essex Edgeworth, (French) artist unknown

Pro-revolutionary depictures of Louis’ execution were, if anything, more gruesome than anti-revolutionary ones. Only the rhetoric of the captions distinguished them, as in this image from a Montagnard pamphlet, which is labeled “Food for thought for crowned mountebanks: may an impure blood water our soil. Monday, January 21, 1793, at a quarter past ten in the morning, on the Place de la Révolution, the tyrant who used to be called Louis XVI fell beneath the sword of Law”: 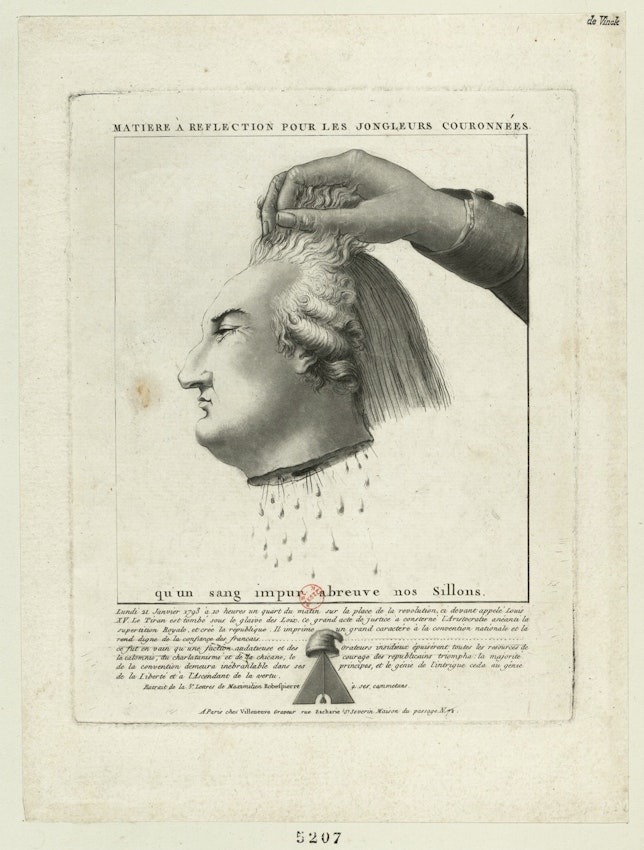 There was no “sword” involved, of course — only the guillotine, which, ironically enough, Louis XVI had helped design. An amateur locksmith generally fascinated by mechanical things, Louis had suggested that the device use an oblique blade rather than a crescent one to make certain that the head would come off at the first blow, no matter the shape of the neck. At any rate, Louis’ own head was apparently severed without any (mechanical) trouble at all.

You can browse a selection of other images of Louis XVI’s beheading below. These range from the wholly imagined rendering by the German Georg Heinrich Sieveking — who had been in sympathy with the Revolution until the king was killed — to some of the many anonymous popular engravings that circulated widely in 1793. In these, the same details are repeated again and again (not least of all the towering symbol of the guillotine), as though artists and audience alike were trying to find a place for this shocking event, which shaped history and reshaped reality.

Visit us today at Schmidt Fine Art Galleryto view our entire collection of works taken from around the world. All our prints are manufactured in the USA.

Often, when contributors on Unsplash look at their stats page to get a better understanding of how their images are p...
Read More

Here are 5 easy ways to improve your mobile photography Most photographers will tell you that when it comes to takin...
Read More

It’s More Than Just A Photograph

Photographs have a life unto themselves. They do far more than merely representing the world they depict. Photographs...
Read More
Product has been added to your wishlist.
You can view your wishlist by creating or login account.
Please create account through ##customer_email## email
Login Register
×
Welcome Newcomer